Wasim Akram shared a video of when he made Roshan Mahanama retire hurt after hitting him in the box with two consecutive deliveries. 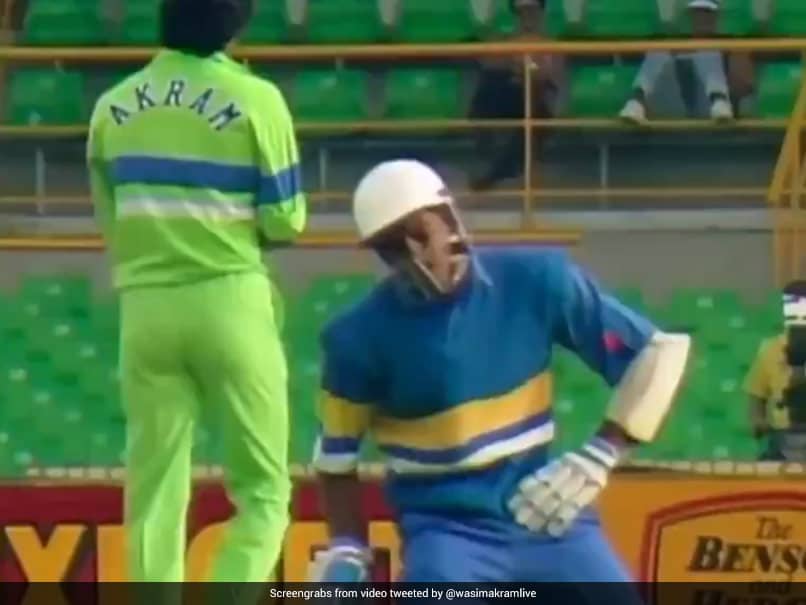 Roshan Mahanama was forced to retire hurt after the incident, but came back to finish the innings.© Twitter

Wasim Akram had bamboozled several batsmen throughout his playing career but what he inadvertently did to Roshan Mahanama on one fateful day at the WACA Stadium in Perth was painfully tragic. In a clash between Pakistan and Sri Lanka during the Benson and Hedges World Series 1989-90, two deliveries that moved back in to the right-handed Mahanama after pitching caught the batsman unawares as he was hit in the box on not one, but two consecutive deliveries. While such incidents have usually made onlookers see the funny side to it, for the batsman who is hit in the unmentionables it's far from funny.

Akram posted a video of the two deliveries on Twitter and had a cheeky comment to go with it. "And Roshan went on to be a grandfather...."

As is expected of any batsman who gets hit, Mahanama took his time after enduring the first blow by moving towards square leg and squatting on the ground. He had tried to shoulder arms to the delivery after moving across his stumps, but the ball came back in to him leaving him defenceless.

Just when he thought he could shrug off the blow and concentrate on the next ball, a similar delivery that pitched short of good length and nipped back even more sharply to hit Mahanama again at the spot where he had been hit only a few moments ago.

The second blow sent Mahanama grimacing with pain as he lay on his fours even as the Pakistani fielders huddled around the Sri Lankan and offered what seemed to be exercises to alleviate the pain.

Dean Jones, former Australia batsman, went one up on Akram with an even cheekier comment. "Well instead of using his bat... he preferred playing you with something else!" Jones tweeted.

Well instead of using his bat... he preferred playing you with something else! #notfastenough https://t.co/P6xckGjvLW

While Twitterati enjoyed the banter and gave their own views on the incident, Mahanama, the former ICC match referee, may have had differing views on this as he might remember that he had to retire hurt after the second blow.

It was the first over of the innings and Mahanama was yet to open his account. Sri Lanka were set 223 runs to win and when the Lankans lost their fifth wicket on 179, the opener walked out to resume his innings.

He finished unbeaten on 19 as Sri Lanka won by three wickets. Akram and Jones had the fun on Twitter but it was Mahanama and Sri Lanka who had had the last laugh in Perth.