Deepti Sharma picked up figures of 4-10 while Shafali Verma smashed her second consecutive half century, helping India to a comfortable 10-wicket win. 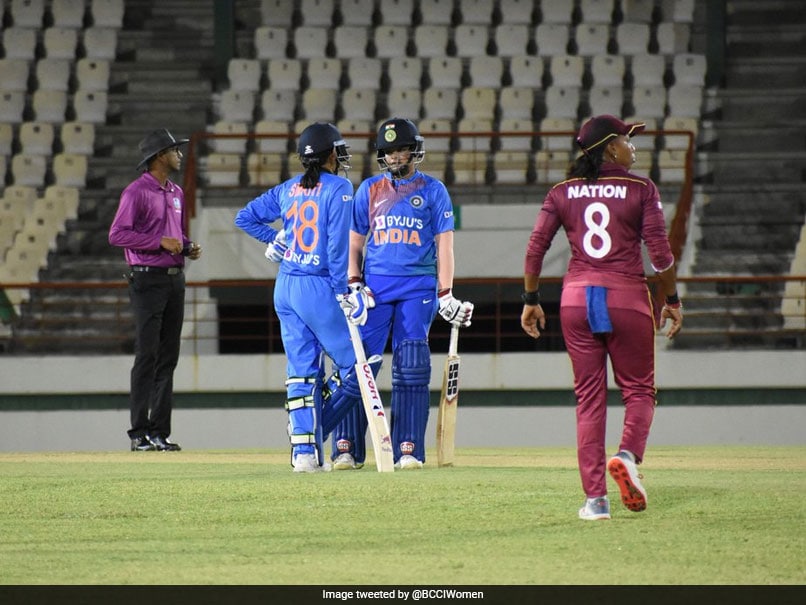 Shafali Verma continued with her prolific run as she helped India women defeat West Indies women by 10 wickets in the second T20I of the five-match series at the Daren Sammy Cricket Ground. Chasing a modest target of 104 on Sunday evening, Indian eves broke little sweat as both the Indian openers, who stitched a record partnership in the first match, got the team across the line in the 11th over. Earlier, Anisa Mohammed, who was captaining the side after Stafanie Taylor was ruled out of the series due to injury, won the toss and elected to bat first.

Just like the opening game, runs were again hard to come as Hayley Matthews and Stacy-Ann King opened the batting. Stacy-Ann was the first to go for 7 followed by Shemaine Campbelle for a four-ball 0.

Chedean Nation steadied the Windies middle order with Hayley, as the pair added 34 runs together before the opener - in her attempt to hit a straight six -- was caught in the deep for 23. Chedean fell soon after for 32 as Natasha McLean was the only other batter to reach double figures. She made 17.

The hosts finished their 20 overs on 103/7. Spinner Deepti Sharma was the pick of the Indian bowlers as she returned with figures of 4/10 from her four overs.

Shafali, who on Saturday had become the youngest Indian to score an internationally fifty, took a liking to the West Indies' bowling.

The 15-year-old struck her second consecutive half-century to lead the Indians to victory in the 11th over. She finished on 69 not out while her opening partner Smriti Mandhana remained unbeaten at 30.

India won the match reaching 104/0 in 10.3 overs. Afy Fletcher was the most economical West Indies Women's bowler with 0/11.

With a lead of 2-0, India will now aim to seal the series when they take on West Indies in the third T20I at the Providence Stadium in Guyana on Thursday.

West Indies Women Deepti Sharma Cricket
Get the latest updates on SA vs IND 2021-22, check out the Schedule and Live Score . Like us on Facebook or follow us on Twitter for more sports updates. You can also download the NDTV Cricket app for Android or iOS.