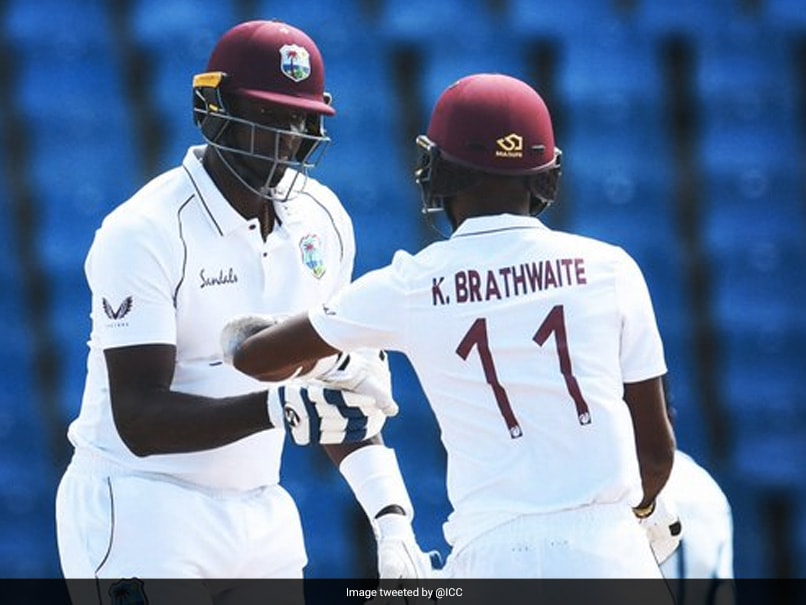 Half-centuries from West Indies skipper Kraigg Brathwaite, Kyle Mayers and Jason Holder helped the hosts to set up a 377-run target for Sri Lanka in the ongoing second Test, at the Sir Vivian Richards Stadium. At stumps on day four, Sri Lanka were at the score of 29/0 in nine overs. Lahiru Thirimanne and skipper Dimuth Karunaratne are unbeaten at 17 and 11 runs respectively. Sri Lanka need 348 runs to win the match on the final day of the Test. Windies declared their second innings on 280/4d and are in dominating position after posting a huge 377 runs target for the visitors.

Braithwaite and John Campbell opened the innings for hosts but the latter failed to manage his stay long at the crease and departed after scoring 10 runs.

Niroshan Dickwella got hold of the opener Campbell in the seventh over. With Nkrumah Bonner battling a back injury, Jermaine Blackwood was promoted to the first drop and scored an eventful 18.

Blackwood and Brathwaite added 44-run for the second wicket before the Dushmantha Chameera picked Blackwood (18). Windies were at the score of 58/2.

After Blackwood's departure, Kyle Mayers joined skipper Brathwaite in the middle. The duo added 82-run for the third wicket stand and guided the side to the three-figure mark. Suranga Lakmal removed Mayers after playing a 55-run knock and broke the danger-looking partnership.

Jason Holder came in to bat at number five. Braithwaite and Holder played cautiously and added runs to the scoreboard. The duo stitched an 87-run stand for the fourth wicket.

Meanwhile, Brathwaite completed his half-century off 137 balls. Brathwaite freed his arms after the tea break, picking up boundaries in back-to-back overs and looked on course to notch twin centuries.

Dushmantha Chameera bagged Brathwaite 15-run short of his century and put end to his 85-run knock.

Joshua Da Silva and Holder then scored runs at a quick pace and steered the side to the 250-run mark. Meanwhile, Holder completed his 10th Test fifty.

The duo added 53-run s off 42 balls before Windies called the declaration. Holder scored 71 unbeaten including seven boundaries while Da Silva was not out on 20 off 16.

Earlier, Sri Lanka's first innings was wrapped up quickly on day four as Kemar Roach (3/58) struck twice in an over to bowl them out for 258.

Sri Lanka Cricket Team Kraigg Brathwaite Kyle Mayers West Indies vs Sri Lanka, 2nd Test Cricket
Get the latest updates on ICC Women's Cricket World Cup 2022 and IPL 2022, check out the Schedule , Live Score and IPL Points Table. Like us on Facebook or follow us on Twitter for more sports updates. You can also download the NDTV Cricket app for Android or iOS.