Pathum Nissanka kept the West Indies at bay, with Sri Lanka finishing at 250 for eight in reply to the home side's first-innings total of 354 on a rain-affected third day of the second Test 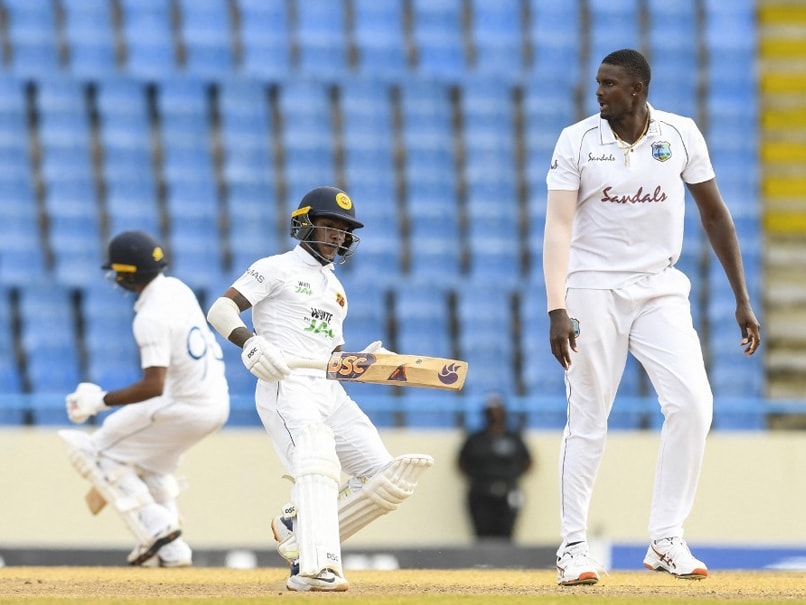 Pathum Nissanka was unbeaten on 49 at Stumps on Day 3 of the second Test.© AFP

Pathum Nissankakept the West Indies at bay, with Sri Lanka limping to the close at 250 for eight in reply to the home side's first-innings total of 354 on a rain-affected third day of the second and final Test in Antigua on Wednesday. Bursting with confidence following a debut hundred in the first Test at the same venue just a week earlier, the 22-year-old right-hander defied the Caribbean pacers in compiling an unbeaten 49. It gave visitors some hope of continuing to whittle away at what is potentially a critical first-innings lead for the West Indies going into day four.

Nissanka's determination for almost three hours, in which he faced 119 deliveries and stroked four boundaries, could yet prove beneficial for Sri Lanka should the other overnight batsman, Lasith Embuldeniya, and last man Vishwa Fernando replicate the resistance shown by the West Indian lower order in their first innings.

Before the showers rolled in though, fast bowler Shannon Gabriel produced the most impressive effort of the day, generating the raw, sustained speed which rattled the Sri Lankans on more than one occasion on their last tour of the region in 2018.

Wicketless and out of sorts in the first Test, Gabriel finally claimed his first wicket of the series in the morning session, firing up disconcerting pace to account for Dinesh Chandimal while Dhananjaya de Silva fell to the occasional off-spin of Jermaine Blackwood.

Resuming at the overnight position of 136 for three, Chandimal and Dhananjaya were immediately challenged by the consistent hostility of Gabriel.

Chandimal was lucky to escape when a diving Rahkeem Cornwall could not hold on to catch at first slip but the former captain's luck ran out when, unsettled by a blow on the hand earlier in the over, he could not control a hook shot to a lifting delivery on the body and substitute fielder Hayden Walsh Jr completed the comfortable catch at deep square-leg to remove Chandimal for 44.

His fifth-wicket partnership with De Silva was worth 75 runs.

With the lunch interval beckoning West Indies had even greater cause for celebration when De Silva was adjudged leg-before for 39 to the first delivery of the morning bowled by Blackwood.

Although the batsman trudged off the field dejectedly, television replays of the dismissal confirmed that the decision would have been overturned had he opted for a DRS referral.

Holder removed Niroshan Dickwella to a catch behind while Suranga Lakmal gave Alzarri Joseph his second wicket of the innings via a simple catch to West Indies skipper Kraigg Brathwaite at mid-on in a truncated afternoon period.

When Holder claimed his second wicket by extracting Dushmantha Chameera, the West Indies were doubly keen to push on from that position of 231 for eight to wrap up the innings before the end of play.

However Nissanka's calm assurance, Embuldeniya's resistance and, most importantly, the return of the rains, which resulted in only 42 overs being bowled in the day, left the West Indies with a job to finish on the penultimate morning.

Sri Lanka Cricket Team Pathum Nissanka Cricket West Indies vs Sri Lanka, 2nd Test
Get the latest updates on ICC T20 Worldcup 2022, check out the Schedule and Live Score. Like us on Facebook or follow us on Twitter for more sports updates. You can also download the NDTV Cricket app for Android or iOS.