Lahiru Thirimanne's third consecutive half-century helped Sri Lanka to reach 136 for three at stumps on the second day of the second and final Test in Antigua on Tuesday. 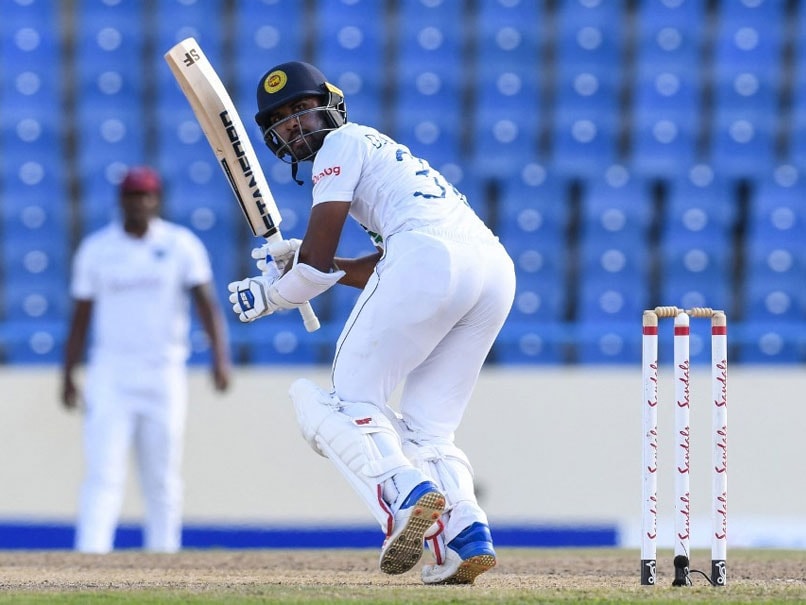 Dinesh Chandimal was unbeaten on 34 at Stumps on Day 2 of the 2nd Test on Tuesday.© AFP

Captain Kraigg Brathwaite was last out in the West Indies' first innings of 354 before the visitors rallied behind Lahiru Thirimanne's third consecutive half-century to reach 136 for three at stumps on the second day of the second and final Test in Antigua on Tuesday. After scores of 70 and 76 in the drawn first Test, Thirimanne's run of good scores -- going back to the series in South Africa last December -- continued with another composed innings of 55.

However, his dismissal to Kemar Roach in the day's final session necessitated consolidation which the unbroken fourth-wicket pair of Dinesh Chandimal (34 not out) and Dhananjaya de Silva (23 not out) provided on an increasingly placid surface with an unbroken stand of 59.

Earlier, Brathwaite extended his occupation of the crease to eight-and-a-half hours which brought him 126 off 311 deliveries with 13 fours, a ninth Test century in which he fulfilled the role of anchor of the innings.

His opposite number Dimuth Karunaratne, by contrast, survived 16 balls before an edged drive off fast bowler Alzarri Joseph produced a stunning diving catch at third slip by Nkrumah Bonner to send the left-hander back to the pavilion for just one when Sri Lanka started their reply immediately after lunch.

As in the first Test a week earlier at the same venue, occasional seamer Kyle Mayers accounted for Oshada Fernando and when Roach bowled Thirimanne through the gate, the innings was at a crossroads at 77 for three.

"I think it's about even-steven at this stage," said former West Indies captain Jason Holder.

"This is a pretty good batting wicket. You have to be really patient. Maybe if we can grab one or two more wickets early tomorrow before the new ball becomes due, we can put them under greater pressure."

Suranga Lakmal again led the Sri Lankan bowling effort with figures of four for 94 off 28 overs as the West Indies batted through the morning session after resuming on 287 for seven.

It was Lakmal, the experienced fast-medium bowler, who finally broke through for an increasingly frustrated Sri Lankan team halfway through the morning session when he terminated a 103-run eighth-wicket partnership between Brathwaite and Rahkeem Cornwall.

Very much the aggressor for the two-and-a-half hours of their time in the middle, Cornwall went past his previous best in Tests -- 61 in the first innings of the first Test just a week earlier.

But he miscued a heave to the on-side and offered a simple catch to Vishwa Fernando at mid-on.

Brathwaite, who resumed on 99 overnight and went to three figures by turning the third ball of the morning from Lakmal to fine leg, never eased out of first gear, even with the demise of Cornwall.

He eventually stroked two more boundaries to add to his tally of 11 from day one but then saw the dismissal of Kemar Roach off Dushmantha Chameera, giving wicketkeeper Niroshan Dickwella his fifth catch of the innings.

Joined by last man Shannon Gabriel, someone with no pretensions to batsmanship, it seemed almost inevitable that Brathwaite would complete the rare feat of carrying his bat through a completed Test innings twice, having done so previously against Pakistan in Sharjah in 2016.

But it was the home captain who perished, playing on to give Chameera a third wicket of the innings.

Dhananjaya de Silva West Indies vs Sri Lanka, 2nd Test Cricket
Get the latest updates on ICC T20 Worldcup 2022 and CWG 2022 check out the Schedule, Live Score and Medals Tally. Like us on Facebook or follow us on Twitter for more sports updates. You can also download the NDTV Cricket app for Android or iOS.