Virat Kohli and Anushka Sharma, who got married on December 11 in Italy, hosted the first of two wedding receptions in New Delhi on Thursday. 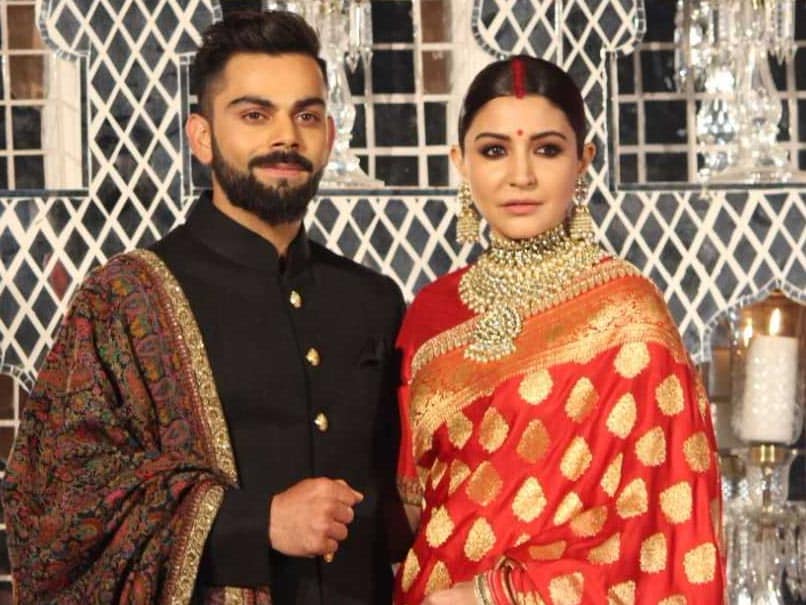 India cricket captain Virat Kohli and wife Anushka Sharma's much-anticipated wedding reception was held at the Taj Palace, New Delhi on Thursday night. The glitzy affair saw high-profile personalities from many walks of life, including Prime Minister Narendra Modi and Finance Minister Arun Jaitley, along with cricketers Shikhar Dhawan and Suresh Raina descend on the venue to celebrate the occasion. Ace designer Sabyasachi Mukherjee, who has designed Virat and Anushka's costumes for all their wedding rituals, was also present at the reception. Interestingly, a special stage was designed for the couple, both aged 29, with candles burning inside crystal fixtures. The couple then got off the stage and joined the guests as they danced the night away to some Punjabi music.

Anushka was all smiles as she looked every bit of the newly-married bride in a red sari. With a neatly-tied bun adorned by a 'gajra', the 'Rab Ne Bana Di Jodi' star completed her looks with heavy jewellery and vermilion.

The reception was mainly attended by the family members and close relatives and friends of the couple amid high security. Police had blocking approach roads to the venue, especially for PM Modi and FM Jaitley's arrival.

Virat and Anushka had personally gone to invite PM Modi for the event on Wednesday.

The reception in Delhi will be followed by another reception in Mumbai, where various cricketers and members of the film fraternity are expected to grace the red carpet.

Comments
Topics mentioned in this article
India Cricket Team Cricket Virat Kohli
Get the latest updates on IPL 2021, IPL Points Table , IPL Schedule 2021 , live score . Like us on Facebook or follow us on Twitter for more sports updates. You can also download the NDTV Cricket app for Android or iOS.