Dhawan posted the video with the caption, "Mohabbat mein Badshah bhi Ghulam Ban jaata hai." He used a song from a famous Amitabh Bachchan and Sridevi movie "Khuda Gawah" along with the video. 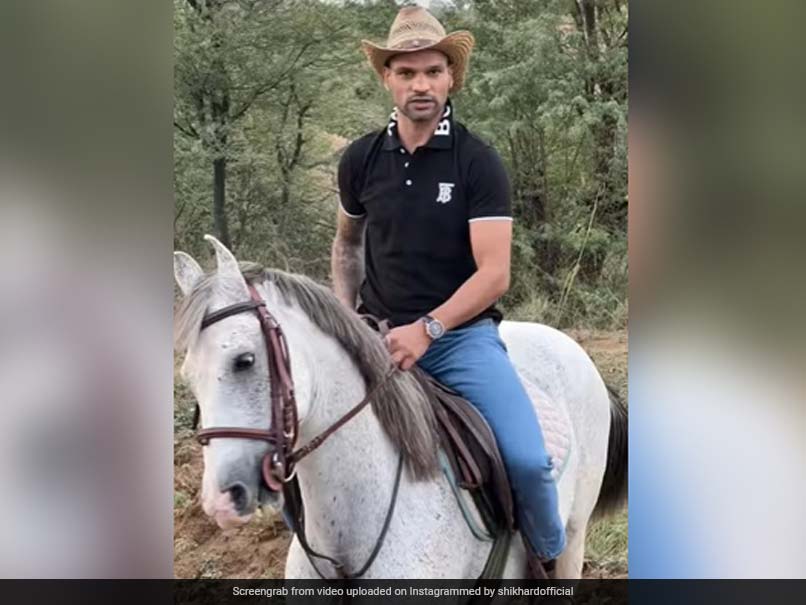 Shikhar Dhawan on a horseback. He posted a video on Instagram of him riding a horse.

India opening batter Shikhar Dhawan might have been overlooked for the upcoming T20I series against South Africa but that has not dimmed his spirits. Known for his jovial nature, Dhawan posted a video on his Instagram handle recently of him riding a horse. Dhawan can be seen wearing a "Cowboy Hat"as he rides the horse. From the looks of it, it seems that Dhawan is quite a regular at horse riding as he looked completely at ease.

Dhawan posted the video with the caption, "Mohabbat mein Badshah bhi Ghulam Ban jaata hai." He used a song from a famous Amitabh Bachchan and Sridevi movie "Khuda Gawah" along with the video.

The southpaw had another impressive IPL season with the bat, but his team Punjab Kings failed to qualify for the Indian Premier League 2022 playoffs. The veteran batter, who had joined PBKS ahead of the start of the season, scored 460 runs in 14 matches at an average of 38.3.

Dhawan also became only the second batter after Virat Kohli to score 6000 runs and more in the history of IPL.

The latest snub from the Indian T20I team has been seen by many as the end of the road for the veteran in cricket's shortest format at the international level.

He though remains in contention for the ODI side and would be working hard to ensure he is in the squad when the selectors decide the team for next year's ICC World Cup, to be played at home in India.

Shikhar Dhawan IPL 2022 India vs South Africa 2022 Cricket Social
Get the latest updates on India vs South Africa and check out  Schedule, Results and Live Score. Like us on Facebook or follow us on Twitter for more sports updates. You can also download the NDTV Cricket app for Android or iOS.