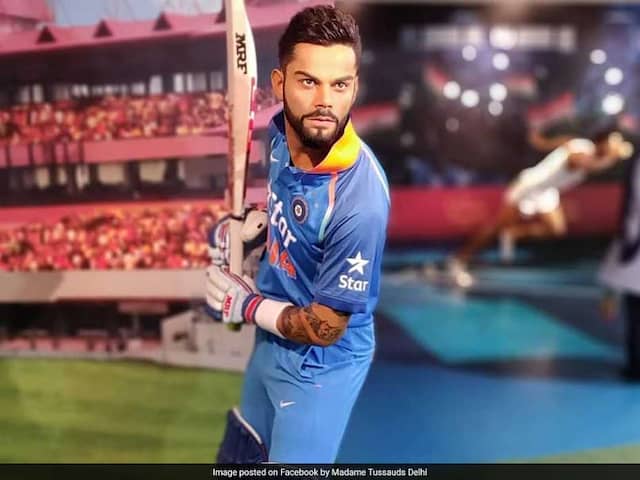 Indian cricket captain Virat Kohli's wax statue was unveiled at the Madame Tussauds museum in New Delhi on Wednesday. But the Indian skipper's statue had to be taken away within a day because of damage. An official at the Madame Tussauds Wax Museum in Delhi confirmed that a part of the Virat Kohli statue had been chipped - perhaps because of excited fans - but added that it had been repaired and was now ready for visitors. "Yes, it was damaged. But now the statue has been rectified," the official told NDTV.com.

The museum suspects the right ear of Virat Kohli's statue was damaged when fans were taking selfies.

"Kohli's statue ear was damaged due to some reason. We have fixed it immediately and fans are most welcome to visit the museum to take the photos with the India captain's statue," the official said.

Kohli has joined David Beckham, Lionel Messi, Kapil Dev and Usain Bolt, whose statues are already in the museum.

"I sincerely appreciate the efforts and incredible work undergone in making my figure. Thanks to Madame Tussauds for choosing me for this lifetime experience. I am grateful to my fans for their love and support," Virat Kohli had said in a statement issued by Madame Tussauds.

"This experience is going to be stored in the fond memories of my life...now waiting to see the fan reactions," Kohli said.

Kohli's figure, depicting him in action wearing the Indian team's ODI jersey, was crafted from over 200 measurements.

The museum, which opened in Connaught Place in Central Delhi in December last year, features wax likenesses of famous personalities from Bollywood, Hollywood, musicians and even politicians.