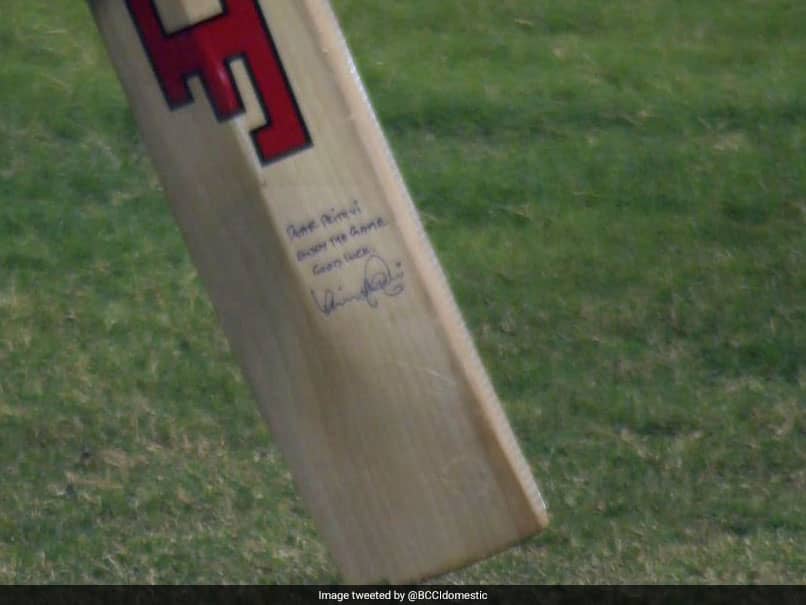 As Prithvi Shaw blazed yet another half-century for Mumbai against Punjab in the Syed Mushtaq Ali Trophy after his return to cricket from a BCCI ban for inadvertently ingesting prohibited substances, fans were left wondering whose autograph was on the youngster's bat. The Board of Control for Cricket in India (BCCI) tweeted a close-up photo of Shaw's bat which had the message "Dear Prithvi, enjoy the game, good luck", along with a signature. While many on Twitter felt that the autograph belonged to India captain Virat Kohli, others argued that it was that of former India and Mumbai batsman Vinod Kambli.

"Whose autograph is this on @PrithviShaw's bat?" the image was captioned.

Others were convinced it belonged to Kambli.

"Vinod Kambli," a user tweeted along with two thumbs-ups.

"I thought it was Vinod Kambli," wrote another.

Some even thought that the autograph was that of India opener Shikhar Dhawan.

Prithvi Shaw had promised an improved version of himself on his 20th birthday, and he has backed up his words with a fine run of form in the domestic T20 competition. He marked his return to cricket with an impressive half-century and followed it up with two more fifties in the five matches that he has played so far.

In Mumbai's last match against Punjab, Shaw scored a 27-ball 53 as his team was knocked out on net run rate despite winning the match. Shreyas Iyer and Suryakumar Yadav also played explosive knocks as Mumbai made 243. However, they needed to restrict Punjab to 150 or less to qualify for the semi-finals and Shubman Gill dashed their hopes with a quickfire 78.

Virat Kohli Vinod Kambli Cricket
Get the latest updates on IPL 2021, IPL Points Table , IPL Schedule 2021 , live score . Like us on Facebook or follow us on Twitter for more sports updates. You can also download the NDTV Cricket app for Android or iOS.