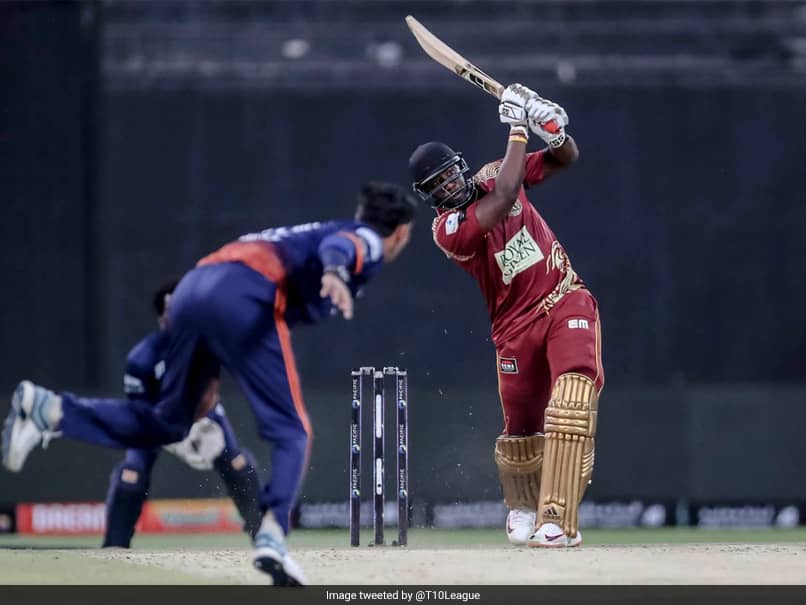 T10 League: Andre Russell won the man of the match award for his blistering knock.© Twitter

Six balls, six runs including a boundary -- that's how the debut T10 innings of Yuvraj Singh panned out at the Sheikh Zayed Cricket Stadium in Abu Dhabi on Friday. Playing for Maratha Arabians in the inaugural match of the third edition of the Abu Dhabi T10, Yuvraj came out to bat at No. 4 after Chris Lynn got out against Northern Warriors. However, hundreds of fans who had turned up to see the stylish left-hander hit the ball out of the park couldn't get enough from the Indian southpaw as he failed to impress.

The marquee player from India started off in great fashion as he collected a boundary courtesy a leg-glance off the bowling of another big-hitting West Indies all-rounder Andre Russell.

The next four deliveries for the retired Indian all-rounder yielded two runs before he got out on the sixth ball while trying to go for a lofted shot over long-on off Rayad Emrit and was eventually caught by Chris Green just past the inner circle.

The 37-year-old, who retired from international cricket earlier this year, didn't get a chance to bowl as Warriors chased down the target of 89 with the utmost ease.

Russell was once again at his menacing best as he smashed 58 runs off just 24 balls and led the Warriors to a comprehensive eight-wicket win. He also contributed with the ball, picking up two wickets in his two overs.

Yuvraj played starring roles for India in their title winning squads at the 2007 World T20 and the 2011 ODI World Cup. His exploits at the two events made a big splash across the globe, including his six sixes in an over in 2007 and the all-round exploits at the 2011 World Cup.