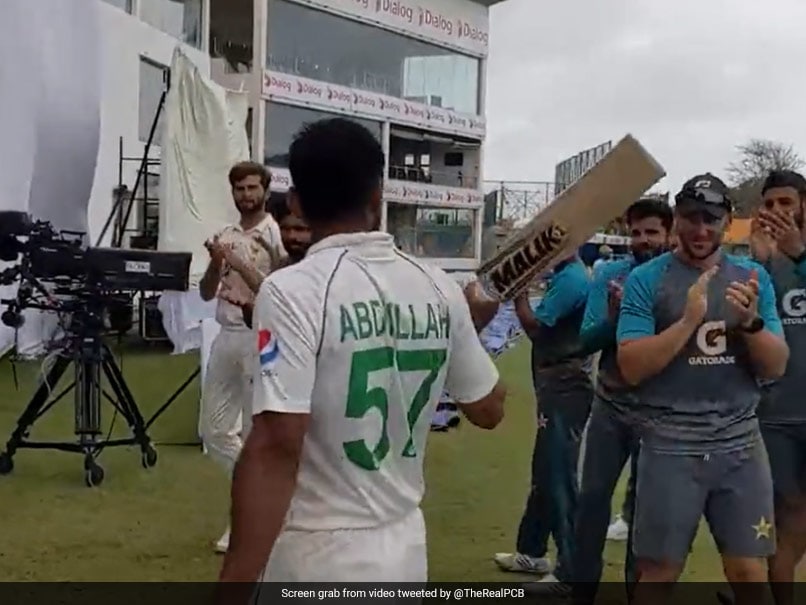 Pakistan completed the highest run-chase at the venue to beat Sri Lanka in the first Test at the picturesque Galle International Cricket Stadium on Wednesday. Chasing a total of 342 runs, Pakistan rode on Abdullah Shafique's career-best score of 160 not out to seal the victory on a rain-hit fifth day in Galle. Notably, Shafique survived three dropped catches, on 70, 135 and 151. After the conclusion of the match, the Pakistan players, led by captain Babar Azam, came down on the field to shake hands with the Sri Lanka team.

The Pakistan players and coaching staff also gave a rousing reception to Shafique as he carried his bat back to the team's dressing room in Galle.

The video of their post-match celebrations were shared by the Pakistan Cricket Board on their official YouTube channel.

In the video, the players can also be seen lauding the batting efforts of Mohammad Nawaz, who had taken five wickets in Sri Lanka's second innings.

For the record, the previous best chase in Galle was 268 when Sri Lanka defeated New Zealand back in 2019.

With the win, Pakistan took a 1-0 lead in the two-match series.

The second Test will be played at the same venue from July 24-28.

The match was initially scheduled to be held at the R Premadasa Stadium in Colombo.

However, due to the ongoing economic crisis, which has led to massive protests across the island nation, the game was shifted to Galle last week.

Sri Lanka Cricket Team Abdullah Shafique Mohammad Nawaz Cricket
Get the latest updates on India vs South Africa and check out  Schedule, Results and Live Score. Like us on Facebook or follow us on Twitter for more sports updates. You can also download the NDTV Cricket app for Android or iOS.