Watch: Shaheen Afridi Apologises To Afif Hossain After Aiming Throw At Him During Second T20I Between Bangladesh And Pakistan

Bangladesh vs Pakistan: Shaheen Shah Afridi personally apologised to Afif Hossain after aiming a throw at him during the second T20I between the two sides at the Sher-e-Bangla Stadium in Dhaka on Saturday. 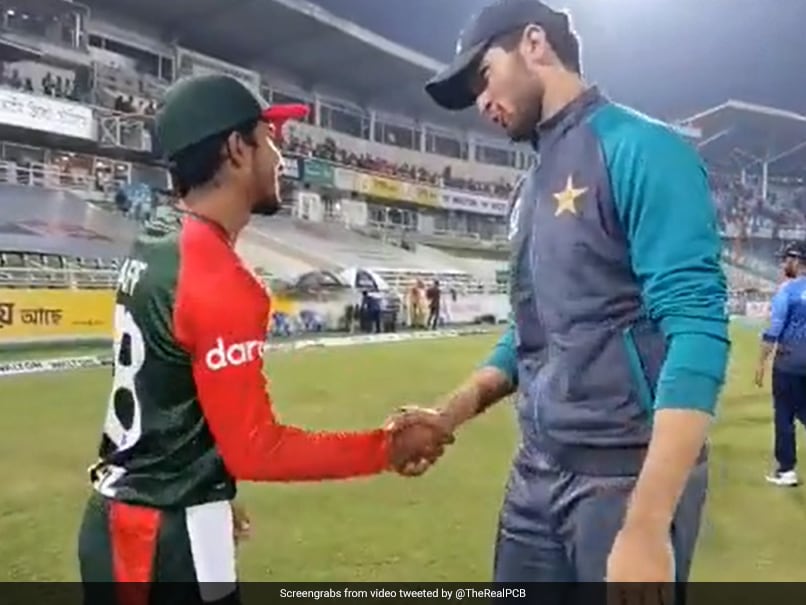 BAN vs PAK: Shaheen Afridi apologising to Afif Hossain after aiming throw at him© Twitter

Pakistan fast bowler Shaheen Shah Afridi personally apologised to Bangladesh batter Afif Hossain after aiming a throw at him during the second T20I between the two sides at the Sher-e-Bangla Stadium in Dhaka on Saturday. The incident had taken place during the third over of Bangaldesh's innings. In the delivery after Hossain hit him for a six, Afridi lost his cool, picked up the ball in his follow through and hurled it at the stumps while the batter was inside the popping crease.
As a result, Afif copped the ball on his leg and the doctor was rushed on the field to check on him.

Meanwhile, Pakistan Cricket Board (PCB) shared a video on their Twitter handle, where Shaheen can be seen walking up to Hossain and apologising to him after the conclusion of the second T20I.

Shaheen, however, has been fined 15 percent of match fees for breaching Level 1 of the ICC Code of Conduct. The players was found to have breached Article 2.9 of the ICC Code of Conduct for Players and Player Support Personnel, which relates to "throwing a ball (or any other item of cricket equipment such as a water bottle) at or near a Player, Player Support Personnel, Umpire, Match Referee or any other third person in an inappropriate and/or dangerous manner during an International Match."

In addition to this, one demerit point has been added to the disciplinary record of Afridi, for whom it was the first offence in a 24-month period.

Afridi admitted the offence and accepted the sanction proposed by Neeyamur Rashid of the Emirates ICC International Panel of Match Referees and ratified by the ICC Cricket Operations department as per the COVID-19 interim playing regulations. There was no need for a formal hearing.

Level 1 breaches carry a minimum penalty of an official reprimand, a maximum penalty of 50 per cent of a player's match fee, and one or two demerit points.

Meanwhile, Pakistan have an unassailable 2-0 lead in three-match series, following an 8-wicket win the second T20I in Dhaka. The third and final T20I will be played on Monday at the same venue.

Shere Bangla National Stadium, Mirpur Cricket
Get the latest updates on SA vs IND 2021-22, check out the Schedule and Live Score . Like us on Facebook or follow us on Twitter for more sports updates. You can also download the NDTV Cricket app for Android or iOS.