MS Dhoni visited the Indian team dressing room after the massive win over South Africa in the 3rd Test at Ranchi. 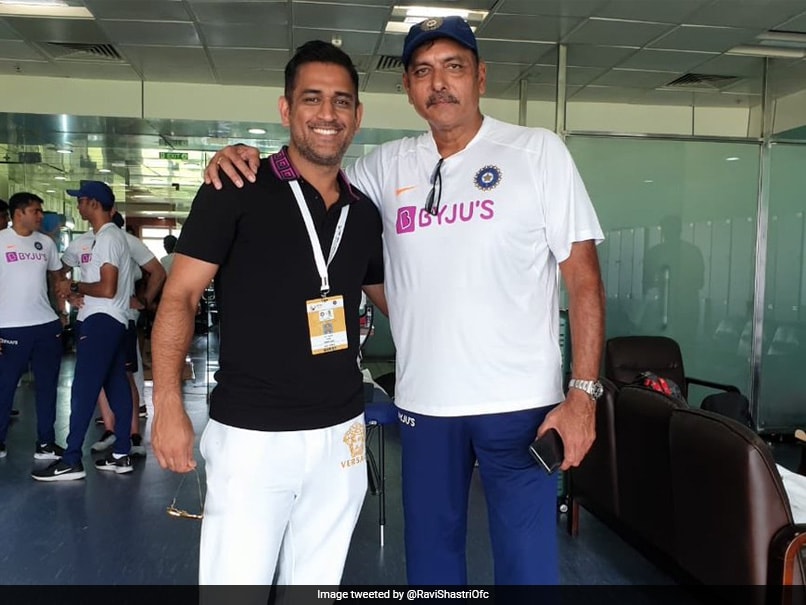 Team India head coach Ravi Shastri tweeted a photo with former India captain MS Dhoni after the team's thumping win against South Africa in the third Test in Ranchi. "Great to see a true Indian legend in his den after a fantastic series win," Shastri captioned the photo. MS Dhoni, who hails from Ranchi, was in the Team India dressing room after they wrapped up the match at the beginning of the fourth day of the final Test in the series.

Fans were overjoyed to see MS Dhoni back in the Indian dressing room, as he has been out of action for the team since their exit from the 2019 World Cup.

Great to see a true Indian legend in his den after a fantastic series win #Dhoni #TeamIndia #INDvsSA pic.twitter.com/P1XKR0iobZ

"Get him back in team ravi sir," a user requested.

"Captain cool come back," another fan wrote, referring to the popular moniker given to the World Cup winning captain.

The Board of Control for Cricket in India (BCCI) earlier tweeted a photo of MS Dhoni speaking with another local hero, Shahbaz Nadeem, in the dressing room. Nadeem made a dream Test debut at his home ground, replacing the injured Kuldeep Yadav in the national team. He picked up four wickets in the match, including two wickets off two consecutive deliveries to finish the match.

"Oh My God!!! Look who is back where he belongs. In the dressing room!!! Mahi!!!" a fan wrote in response to the photo. Others praised Dhoni for always giving advice to others.

With the win in Ranchi, India sealed a 3-0 series whitewash against South Africa and maintained their perfect record in the World Test Championship.

MS Dhoni Ravi Shastri Cricket
Get the latest updates on India vs South Africa and check out  Schedule, Results and Live Score. Like us on Facebook or follow us on Twitter for more sports updates. You can also download the NDTV Cricket app for Android or iOS.