Saurashtra set Gujarat a target of 327 runs to win on the final day of their Ranji Trophy semi-final match. 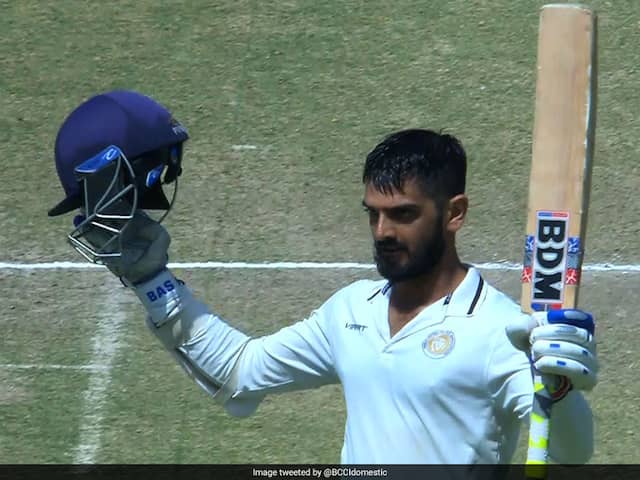 Arpit Vasavada scored a gritty 139 to rescue Saurashtra after they were brought down to 15/5.© Twitter

Arpit Vasavada's gritty 139 propelled Saurashtra to set a challenging 327-run target for Gujarat on the fourth day of their Ranji Trophy semi-final in Rajkot on Tuesday. Chintan Gaja's fiery spell had brought Gujarat back into contention on the third day, but Vasavada's seventh first-class hundred, and the third this season, swung the momentum in favour of the hosts. Courtesy his ton and handy contributions from Chetan Sakariya (45), Chirag Jani (51) and Dharmendrasinh Jadeja (21), Saurashtra recovered from a dismal 15 for five to post 274 in their second innings.

They had a 52-run lead and hence the target set was 327. When stumps were drawn, Gujarat were seven for one with opener Priyank Panchal (0) back in the hut.

Earlier, resuming the day at 66 for five, Sakariya and Vasavada were going strong before their 90-run sixth wicket stand was broken by a horrible mix-up between the two, which resulted in the former's dismissal.

The hosts lost their sixth wicket on 105. Jani then joined Vasavada and played the perfect second-fiddle as the hosts took lunch at 155 for six.

Saurashtra's overall lead had by then passed the 200-run mark. Post lunch, Vasavada and Jani kept frustrating the Gujarat bowlers. It was Gaja again, who provided the crucial break-through for the visitors by dismissing Jani in the 84th over.

The new ball did the trick for Gaja, as he bowled in the good length area and Jani's outside edge flew to Samit Gohel in the second slip.

Vasavada and Jani added 109 runs for the seventh wicket.

Gaja took his seventh wicket when he removed Prerak Mankad (1) at the stroke of tea, which Saurashtra took at 222-8.

After Jadeja fell, Vasavada upped the ante but perished in the process.

In his 139-run innings, he blasted 16 fours and a six. Considering that it's a worn-out pitch, it would be a tough ask for Parthiv Patel-led side to chase the target on the final day.

The winner of this game will clash with Bengal, who made to the summit clash after defeating Karnataka.

Parthiv Patel Cricket Priyank Panchal Dharmendrasinh Jadeja
Get the latest Cricket news, check out the India cricket schedule, Cricket live score . Like us on Facebook or follow us on Twitter for more sports updates. You can also download the NDTV Cricket app for Android or iOS.