Chintan Gaja smashed 61 and took 5/15 as Gujarat ended the day at 66/5 in their second innings while Karnataka finished on 98/3 in their chase of 352. 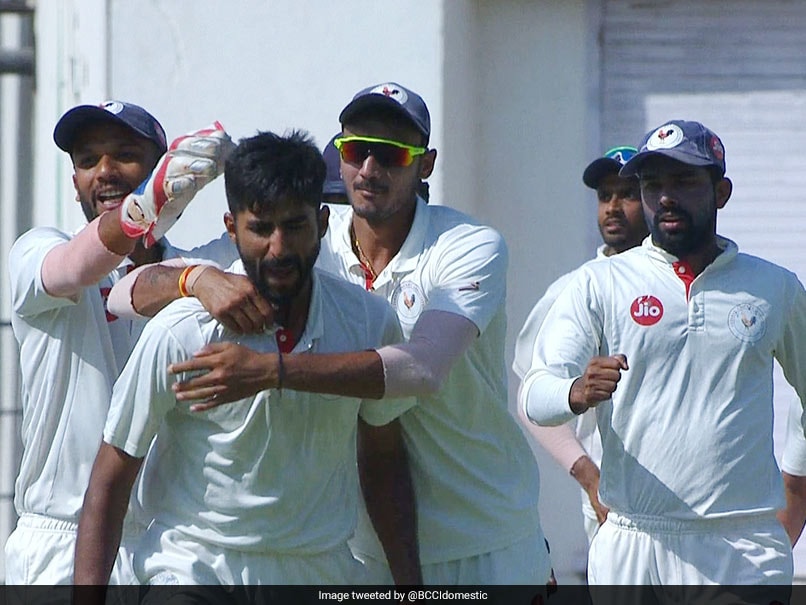 Chintan Gaja had Saurashtra struggling at 15/5 with his five-wicket haul.© Twitter

KL Rahul got out on a duck but Devdutt Padikkal cracked a gritty half century to keep Karnataka in the hunt as they needed 254 to win against Bengal at stumps on the third day of the Ranji Trophy semi-finals at Eden Gardens on Monday. In the other semi clash, medium-pacer Chintan Gaja took all five wickets to thrust Gujarat back in the contest after Saurashtra were reduced to 66/5 with a lead of 118. Gaja, who also scored a vital 61 with the bat, returned figures of 5/15 in seven overs.

At the Eden, all eyes were on in-form India batsman Rahul who was not picked for the Test squad in New Zealand despite scoring heavily in white-ball cricket. Rahul had a point to prove in the five-day format and the stage was set for him to make a mark.

But he failed in both innings, getting out on 26 in the first essay and then being trapped in front by Ishan Porel off just the second ball of his innings. On a day when India were drubbed 0-2 by the Kiwis in Christchurch after they lost the second Test by seven wickets, Rahul's woeful return did not make a good reading.

Bengal resumed the third day on 72/4 but lost their way as Abhimanyu Mithun (4/23) and Krishnappa Gowtham (3/15) did not allow the batters to settle and bundled them out for 161.

Sudip Chatterjee top-scored for the hosts with a fighting 45 as first innings' hero Anustup Majumdar also made 41. Karnataka were dealt a heavy blow in their pursuit of 352 to win. Rahul was dismissed by a peach of a delivery by India 'A' pacer Porel who nabbed five wickets in the first innings.

Rahul offered no shot and chose to leave the delivery outside the line but it swung in sharply to have him plumb in front. Karnataka pair of R. Samarth (27) and Paddikal (50 batting) put up a 57-run partnership after the fall of Rahul but Bengal broke the partnership with a successful review from the bowling of Akash Deep who had Samarth trapped in front.

Mukesh Kumar dismissed Karun Nair (6) as all the three pacer had a share of one wicket each at the close of day three. The 19-year-old Padikkal remained unbeaten on 50 in company of Manish Pandey (11).

But an experienced Arpit Vasavada (23 not out) and Chetan Sakariya (32 not out) stood tall against the Gujarat bowlers till close of play.

KL Rahul Devdutt Padikkal Chintan Gaja
Get the latest updates on India vs South Africa and check out  Schedule, Results and Live Score. Like us on Facebook or follow us on Twitter for more sports updates. You can also download the NDTV Cricket app for Android or iOS.