Ishan Porel complemented Anustup Majumdar's unbeaten century with a five-wicket haul to put Bengal in command against a star-studded Karnataka in their Ranji Trophy semi-final on Sunday. 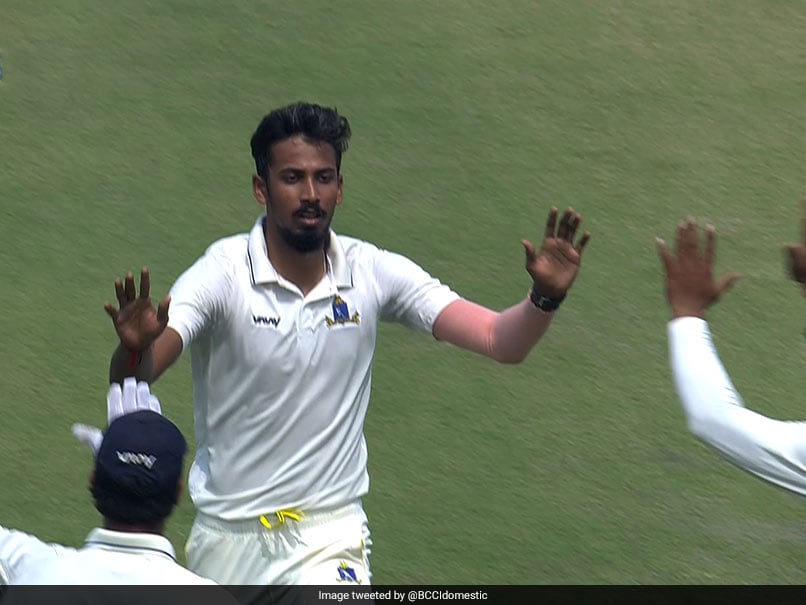 Ishan Porel complemented Anustup Majumdar's unbeaten century with a five-wicket haul to put Bengal in command against a star-studded Karnataka in their Ranji Trophy semi-finalon Sunday. After Majumdar's 149 not out propelled Bengal to 312 after being down at 67 for 6 at one stage, the 21-year-old Porel snared 5 for 39 as the three-pronged Bengal pace attack dismissed the batting-heavy Karnataka for a paltry 122 in 36.2 overs, their lowest total this season. India batsman Rahul, who was adjudged man-of-the-series in their 5-0 T20I whitewash of New Zealand recently, looked out of sorts and scored a forgettable 67-ball 26 (2x4s).

Spinner Krishnappa Gowtham (31) top-scored for Karnataka in a quick 56-run (46 balls) eighth-wicket stand with Abhimanyu Mithun (24) to help Karnataka avoid the follow-on but only to concede a massive 190-run first innings lead.

A total of 15 wickets tumbled on day two as Bengal were 72 for 4 at stumps with Sudip Chatterjee (40 not out) giving Majumdar (1 not out) company, extending the hosts' overall lead to a sizeable 262-run.

In the fag end, Majumdar survived after getting out off a no-ball off Ronit More, as Bengal brightened their prospects to make their first final in Ranji Trophy after 13 years.

Having already conceded the first-innings lead, Karnataka will now have to pull off something special in their second essay to avoid their third semifinal defeat in a row.

Earlier, Majumdar played the innings of his life in a 207-ball knock spanning five hours as Bengal pulled off a heist with their last four batsmen adding 245 runs in a spectacular rescue-act.

He continued to frustrate the Karnataka bowlers, hitting three sixes and 21 boundaries and with last man Porel added 54 runs from 79 balls as the duo batted together for 45 minutes.

Such was the effect of Majumdar's dominating innings that Karnataka looked morally down and out of sorts and Bengal bowlers capitalised on it fully to bundle out the visitors inside two sessions (212 minutes).

Porel gave the first breakthrough when he induced an edge from R Samarth (0) with a ball that angled in before straightening up and Manoj Tiwary gleefully accepted the chance at the second slip.

Porel was on a roll as he sent back Karun Nair (3) in the first ball of his second over in almost an action replay of the first dismissal, only this time the Karnataka skipper was caught by Maujmdar at the first slip.

At the other end, India opener Rahul, fresh from three fifties and one century in the limited overs series in New Zealand, survived some anxious moments including a caught-behind review.

Under pressure, Rahul, who was playing his first Ranji match after more than two years, took his time and struck his first boundary in the seventh over playing Porel with soft hands through the slip cordon.

As Rahul looked to rebuild Karnataka innings in the company of Krishnamurthy Siddharth, it was Akash Deep (3/30) who joined the party dismissing the latter for 14.

Mukesh Kumar (2/46) opened his account knocking off Manish Pandey's (12) middle stumps but his biggest scalp came later in the form of Rahul as Bengal camp went in jubilation in front of a 4,000-odd Sunday crowd.

In a surprise decision the in-form 19-year-old left-handed opener Devdutt Padikkal dropped down to six only to become Porel's third victim in the first over of his second spell.

At that crucial phase, Karnataka lost three wickets in three overs including that of Rahul, who failed to convert his start and lost his wicket playing an uppish drive to to Abhishek Raman at deep point.

KL Rahul Cricket Anustup Majumdar
Get the latest updates on ICC T20 Worldcup 2022 and CWG 2022 check out the Schedule, Live Score and Medals Tally. Like us on Facebook or follow us on Twitter for more sports updates. You can also download the NDTV Cricket app for Android or iOS.