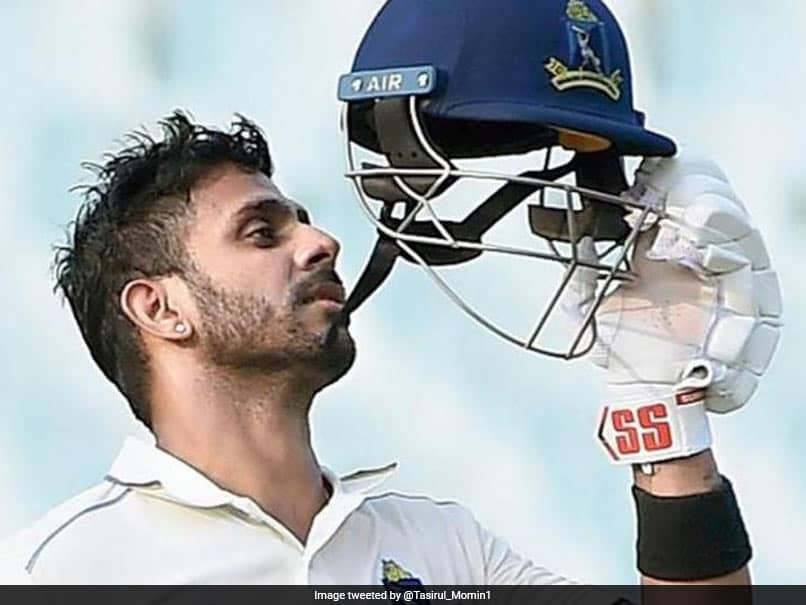 Senior batsman Manoj Tiwary cracked his maiden first class triple century to put Bengal in the driver's seat against Hyderabad in their Ranji Trophy Group A clash at Bengal Cricket Academy Ground, West Bengal on Monday. The 34-year-old, who has played 12 ODIs and 3 T20 Internationals (T20Is), was at his sublime best, smashing 30 fours and five sixes, en route to his unbeaten 303 from 414 balls at a strike rate of 73.19. His marathon knock lasted 10 hours and 30 minutes.

His final 50 came off just 37 balls as he got to the landmark in the fourth ball of the final session of the second day, gliding part-timer Buddhi Rahul through covers boundary.

Bengal immediately declared their first innings at 635 for seven.

Tiwary, who last played for India in 2015, also became only the second batsman from Bengal to hit a triple ton -- after Devang Gandhi's 323 versus Assam at Guwahati in the 1998-99 season.

His previous best was 267 as Bengal skipper against Madhya Pradesh in a drawn encounter in Kolkata in 2011-12 season.

His brilliant innings on Monday came at a time when he is going through difficult times, having remained unsold in the IPL auctions last month before getting embroiled in a controversy when he asked national selector Devang Gandhi to leave the Bengal team dressing room for his "unauthorised" entry.

He was also axed from captaincy in the beginning of the season, with the selectors opting for 24-year-old Abhimanyu Easwaran.

After Tiwary's sensational innings, it was time for Bengal pace duo of Akash Deep (3/46) and Mukesh Kumar (2/29) to wreak havoc as they reduced Hyderabad to 83 for five in the final session. Hyderabad still trail Bengal by 552 runs with two days left.

Bengal also got a fine contribution from their number 9 batsman, Arnab Nandi, who played some exquisite shots, including a lofted front-footed six, for an unbeaten 65 from 83 balls (8x4, 1x6) in an 159-run unbroken stand with Tiwary.

Shahbaz Ahmed (49 from 79 balls; 5x4, 1x6) also stitched a 108-run stand with Tiwary but the number eight batter missed his fifty with a suicidal run-out. Overnight 156, the seasoned Tiwary continued from where he left on the first day.

He also had luck favouring him when he was let off at the first slip on 166 off the bowling of Ravi Kiran (3/74). From there on, he paced his innings beautifully and reached his double century with a boundary against off-spinner Saketh Sairam in third man region.

"He paced his innings brilliantly. He was aggressive initially and then settled into his zone. He is a champion player, only second batsman from Bengal to score a triple," Bengal coach Arun Lal said, hailing Tiwary's knock.

"It was a magnificent innings. I'm just amazed that he has done it more often. Our pace bowling was also lethal. We should have had three seamers on this wicket. I think we misread it by picking three spinners."

Rookie Bengal pacer Akash Deep gave the first breakthrough with an unplayable rising delivery as Akshath Reddy (2) failed to duck and edged it to Arnab Nandi at the gully in the fourth over.

In his next over, he dismissed Tanay Thyagarajan (7) taken by Abhimanyu Easwaran at the slip before Mukesh opened his account, knocking off T Ravi Teja's off stump in the ninth over.

Jaweed Ali (19) and Tanmay Agarwal (10) were at the crease at stumps on day two as Hyderabad have a tough task in hand to avoid a fifth defeat from six matches.

Slipped to 10th position in the Elite cross pool, Bengal will look for a bonus point victory to remain in the hunt.

Manoj Tiwary Cricket
Get the latest updates on India vs Australia Series, check out the India vs Australia Schedule for 2020-21 and Ind vs Aus live score . Like us on Facebook or follow us on Twitter for more sports updates. You can also download the NDTV Cricket app for Android or iOS.