Ranji Trophy: Ishant Sharma picked up eight wickets in the match as Delhi registered their first win of the season after beating Hyderabad by seven wickets. 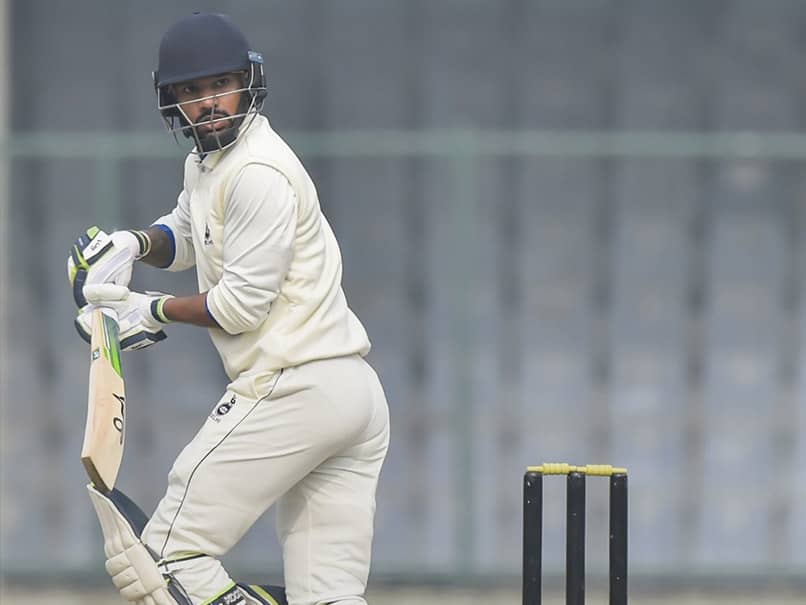 Shikhar Dhawan was adjudged the player of the match for his match-defining 140 runs.© PTI

Delhi registered their first victory of the 2019-20 season of the Ranji Trophy after defeating Hyderabad by seven wickets in a Round 3 contest at the Arun Jaitley Stadium in New Delhi on Saturday as pacer Ishant Sharma scalped eight wickets in the match. Chasing 84 runs for a win, Dhruv Shorey's unbeaten 32 along with skipper and opener Shikhar Dhawan's 21-run contribution helped Delhi cross the line without too many hiccups.

The contest between Andhra and Bengal ended without any result and based on their first innings lead, the hosts were awarded three points while their opponents settled for one at the Eden Gardens in Kolkata.

Similarly, the match between Karnataka and Himachal Pradesh resulted in a draw with the former settling with one point while the visitors clinched three points in Mysore.

In Surat, hosts Gujarat picked up six points as they gunned down Kerala for 177 runs. The visitors were set a 268-run target however, Axar Patel's (4/50) four-fer along with Chintan Gaja's 3/41 helped the home side wrap up their opponents well in time to register a 90-run win.

There was no outcome of the matches featuring Vidarbha-Punjab and Madhya Pradesh-Tamil Nadu in Nagpur and Indore respectively.

Skipper Saurabh Kumar (6/55) and Zeeshan Ansari (3/42) came out all guns blazing against Saurashtra, who were bowled out for a paltry 120 in their second essay as Uttar Pradesh registered a convincing win by an innings and 72 runs in Rajkot.

In the Palam Ground in Delhi, Services registered an eight-wicket win as they overhauled the 38-run target with ease against Tripura.

Three other matches in the group -- Maharashtra vs Chhattisgarh, Jharkhand vs Haryana and Jammu and Kashmir vs Assam resulted in a draw in Pune, Jamshedpur and Jammu respectively.

In the Plate Group matches, three wickets each by Vinay Kumar and Sagar Udeshi helped Puducherry bowl out Mizoram for just 113 runs in their second essay to gift themselves a victory by an innings and 272 runs in Kolkata. Earlier in reply to Mizoram's paltry 73-run first innings total, Puducherry had put up a massive 458/5(d).

Chasing 112 runs for victory in Bhubaneswar, Nagaland rode opener Shrikant Mundhe's 45 along with Yogesh Takawale's 43 to overhaul the target, losing a wicket to register a nine-wicket win over Sikkim.

In Dibrugarh, Rex Singh was once again the reason behind Manipur's second victory of the season as the left-arm pacer's impressive figures of 6/58 rattled the Arunachal Pradesh batting line-up and they were eventually bowled out for 184 runs while chasing a 269-run target.

Gurinder Singh's (4/44) four-fer and Bipul Sharma's 3/18 saw the entire Meghalaya side back in the pavilion for 118 runs in their second essay. In reply to Chandigarh's 455/9, Meghalaya could only manage 148 in their first innings after which they were asked to follow-on.

The match between Bihar and Goa didn't draw any outcome in Patna.

Ishant Sharma Cricket
Get the latest updates on IPL 2020, check out the IPL Schedule for 2020 and Indian Premier League (IPL) Cricket live score . Like us on Facebook or follow us on Twitter for more sports updates. You can also download the NDTV Cricket app for Android or iOS.