MS Dhoni is seen posing with his six-year-old fanboy, Riyan Parag, in this throwback photo. 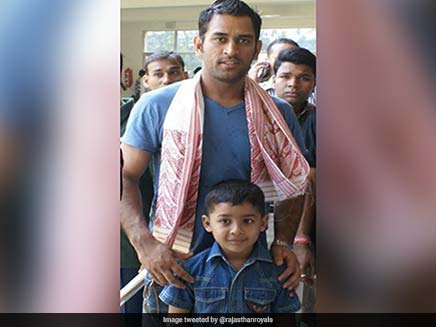 Rajasthan Royals posted a picture of Riyan Parag, in his childhood, posing with MS Dhoni.© Twitter

The first Indian Premier League (IPL) champions Rajasthan Royals (RR) on Wednesday used an old photograph of their all-rounder Riyan Parag to inspire their fans. Sharing a collage made of two images of former India skipper Mahendra Singh Dhoni and Parag on its official Twitter handle, RR wrote, "You evolve, you learn, you grow." In the first snap, Dhoni could be seen posing with his six-year-old fanboy Parag, who later went on to become a star player for Rajasthan Royals. The second picture is from Parag's IPL debut in 2019 against Chennai Super Kings (CSK).

"You evolve, you learn, you grow." pic.twitter.com/Kdc14oC7K7

The picture was widely shared on the Internet after Parag's IPL debut in 2019. Speaking about the viral photograph in an interview shared by the official website of IPL, Parag had said that growing up he was a huge Dhoni and the snap was taken when he was six or seven years old.

"I was six or seven years old at the time that picture was taken. I've been idolising Dhoni since I was 6-7 years old and now bowling to him, setting the field against him, even batting while he was keeping behind, it's just surreal," Parag told his Rajasthan teammate Jaydev Unadkat.

Parag scored 16 runs off 14 balls in that match before he was caught behind the stumps by Dhoni off Shardul Thakur's bowling. He bowled three overs in that match and went wicketless while giving away 24 runs. Since then, he has been an integral part of Rajasthan's squad.

So far, he has played 26 games for Rajasthan and scored 324 runs at an average of 20.25 and a strike rate of 126-07. He has also picked three wickets in his three-year-long IPL career.

Parag also featured in Rajasthan's all seven games in IPL 2021 before the tournament was suspended by the Board of Control for Cricket in India (BCCI) mid-way last month. He had scored 78 runs and picked one wicket.

He would be next seen on the field for Rajasthan in September when the second phase of IPL kicks off in the United Arab Emirates.