Abid Ali's hundred came in 267 minutes, laced with 11 boundaries, and was the highlight of a Test badly affected by the weather. 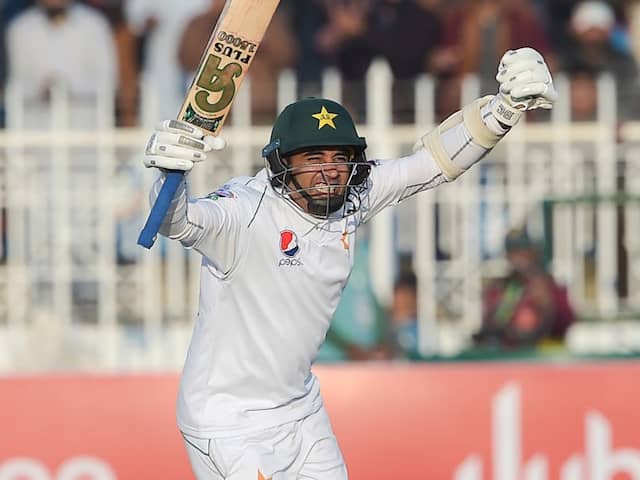 Abid Ali is the 11th Pakistan batsman to score a century on Test debut.© AFP

Opener Abid Ali became the only batsman to score hundreds on both Test and one-day debuts as Pakistan's first home match in the long form of the game since the 2009 attack on the visiting Sri Lanka team ended in a tame draw against the same opponents Sunday. On 95, the 32-year-old hit paceman Vishwa Fernando for a boundary and then drove him through cover for two to complete his hundred, raising his hands in jubilation before kneeling on the ground to offer a prayer of gratitude.

His hundred came in 267 minutes, laced with 11 boundaries, and was the highlight of a Test badly affected by the weather.

Pakistan finished at 252-2, with stylish batsman Babar Azam knocking his third Test century with a boundary off spinner Dilruwan Perera.

Azam ended with 102 not out, which came in 151 minutes of punishing batting spiced by 14 crisp boundaries.

But the day belonged to Abid, one of 15 batsmen to score a hundred on their one-day international debut -- against Australia in Dubai in March this year -- since limited over cricket began in January 1971.

None of the others also scored a century on their debut in Test cricket, which started in 1876.

Abid is the 11th Pakistan batsman to score a century on Test debut.

"I don't have words to thank the Almighty," said Abid of his feat.

"My plan was to see off the new ball and then I gradually built the innings with plans for every five overs. So I kept trying to keep that up, and Babar gave me confidence in 90s," Abid added.

The second Test is in Karachi starting December 19.