Australia were dismissed for 145 in the first innings of the second Test in Abu Dhabi. 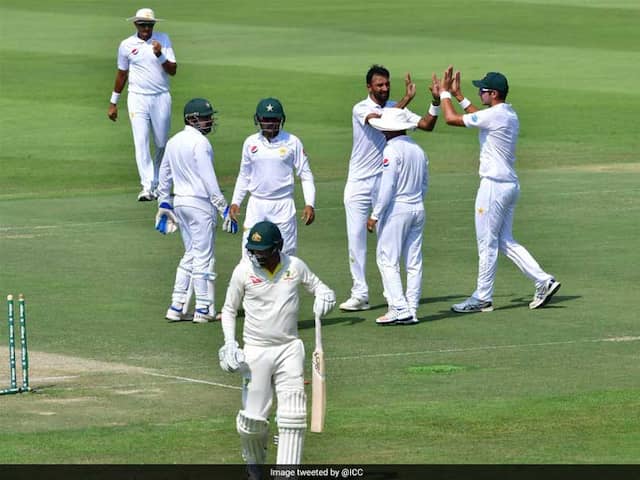 Pakistan took a 137-run lead in the first innings against Australia in the second Test.© Twitter

Australia suffered a batting collapse against Pakistan in the first innings on Day two of the second Test in Abu Dhabi. After getting off to a poor start (20 for two wickets) towards the end of day one, the poor form of the batsmen continued on the second day as their side folded on a paltry 145 in 50.4 overs. Former Australia captain Shane Warne, post the debacle, took to Twitter to criticize the batsmen, who put the team on the back-foot after the bowlers dismissed the home team for 282 in the first innings.

Australia's bowling quality has saved this Oz side for a while now, but how long can they keep doing it ? These current batsman need to stand up & quickly or it will be a v long summer, Finch/Khawaja been good and will start in the 1st test in Oz - the rest ??? @FOXCricketLive

Ps Bowlers will get injured if they have to continue to bowl day after day without rest, due to the batsman continue to fail. Also, I'm a huge fan of Mitch Marsh & his capabilities but appointed VC & batting so high?Paine has to bat in top 6 & why has Lyon not been appointed VC?

The Australian bowlers bowled exceptionally well on the first day, restricting Pakistan to a decent score in the first innings of the second Test in Abu Dhabi. At one stage Pakistan were reeling at 57 for five, but resilient knocks from debutant Fakhar Zaman (94) and skipper Sarfraz Ahmed (94) took the home team to 282 before bundling out.

The spin duo of Nathan Lyon and Marnus Labuschagne shared seven wickets between them on the opening day of the Test. Off-spinner Lyon starred with the ball clinching four wickets in six balls. Apart from the spinners, Mitchell Starc took two wickets while Mitchell Marsh bagged a wicket as well.

In their first innings, no Australian batsman was able to cross the 40-run mark as the team was bundled out for a low total.

Sheikh Zayed Stadium, Abu Dhabi Pakistan vs Australia, 2nd Test Cricket
Get the latest updates on IPL 2020, check out the IPL Schedule for 2020 and Indian Premier League (IPL) Cricket live score . Like us on Facebook or follow us on Twitter for more sports updates. You can also download the NDTV Cricket app for Android or iOS.