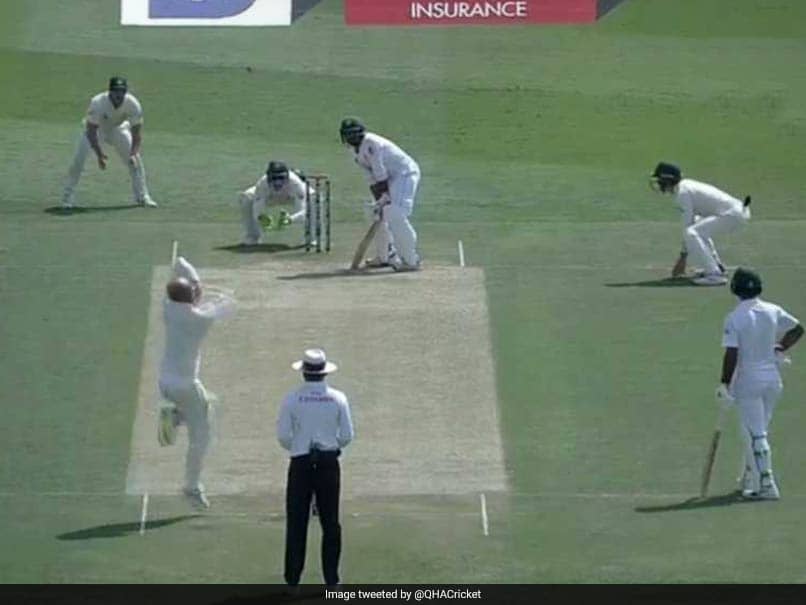 Pakistan batsman Sarfraz Ahmed played a captain's knock on the first day of the second and final Test in Abu Dhabi on Tuesday. The 31-year-old added 147 runs for the sixth wicket with opener Fakhar Zaman -- who also scored 94 -- to lift Pakistan from a precarious 57-5 to 282 all out. During his batting inning, it was Sarfraz Ahmed's batting stance that caught everyone's attention. Sarfraz Ahmed was batting in such a way that all his three wickets were visible to the bowler. Despite his stance, he played a valiant knock of 94 before falling prey to Marnus Labuschagne's delivery.

@micheal_fergie @Mick_511 me at indoor

Shows how confident he was today!!!
Too bad that he and fakhar both fell in their 90's

Stance like this keeps the bowler guessing what to bowl to the batsma n. Reminds me of Abdul Razzaq as well #PakvAus #AusvPak

Sarfaraz looks really confident today and I don't know really how !
Guy has been under the pump for his batting and captaincy, Pakistan lose 4 quick wickets and he comes and bats like this
Cut drive sweep flick everything
Superb counterattack

Australia closed the day at 20-2, trailing by 262 runs with eight wickets in hand.

After his below-par 15-run innings and weak wicketkeeping in the first Test which ended with his team unable to turn a strong position into a victory, Sarfraz faced calls for his sacking as Test captain. "Yeah the pressure was there, definitely," said Sarfraz, who had made just 74 runs in his six previous Test innings. "A lot of it. You know it's coming from all corners. Somebody is saying leave Test cricket, somebody is saying leave captaincy, some are saying leave him out of the team. "When all this happens and you score runs then it's a bit of relief and then to do it in a situation where you were 57-5 and in a really bad shape..."

Sarfraz said Pakistan had fought back admirably. "It's good that we scored 282 and then got two wickets, including that of Usman Khawaja because he can play a long innings, so I think it has become even for both the teams now."

The first Test in the two-match series ended in a draw in Dubai last week.