Rohit Sharma boasts of a formidable record in the limited-overs format but hasn't been able to remain a mainstay in the longer format. 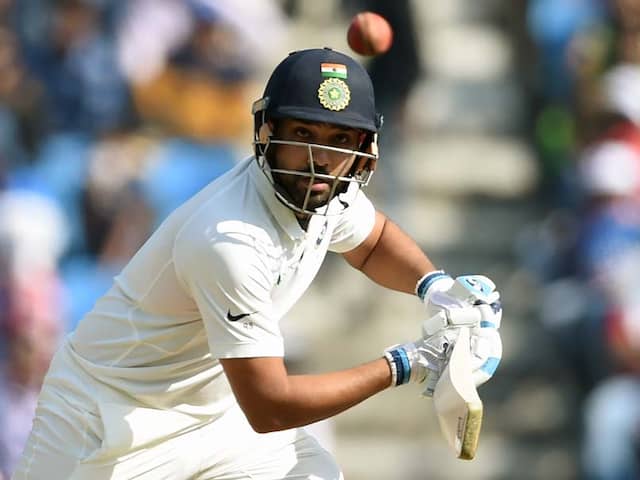 India batsman Rohit Sharma on Monday said that there was no need in fretting over his start-stop Test career. He added that "half" of his playing days were over. Rohit wants to shift his entire focus on the remaining playing career. "There's limited time you have as a player and I have finished almost half of it. There's no point in spending the remaining half thinking whether I'll be picked or not. I am going forward with the theory of 'whatever time I have make it count'," said Rohit about his below-par record in international red ball cricket. Rohit boasts of a formidable record in the limited-overs format. His records in Tests aren't that bad with 1479 runs at an impressive average of 39.97 from 25 games.

Due to his inconsistent performances in South Africa, Rohit has been dropped from India's squad for the one-off Test against Afghanistan in Bengaluru, starting June 14. But he doesn't have any complain and said he is at such a stage of his career where he can't thing about selection.

"For me, I am not at a stage to worry about whether I'll be picked or not. I need to enjoy my game. The first five-six years of my career, it was all about 'oh, will I be picked? Will I play'! Now it's all about enjoying the game. These things keeps adding pressure on you. Instead, it's best to enjoy yourself in what you do and give your best," he said.

"I got into the national team when I was 20 and I made my Test debut when I was 26. I had an opportunity to make my debut in 2010, but I missed that (due to a freak injury while playing football at practice). After that, it made me realise that the more you want, your attitude changes. I have realised there's time for everything.

"There has to be time and a slot available for it. The seniors - Sachin, Rahul, VVS and Sourav - were all playing then so we had to wait. After a point, I realised there's no point thinking about it (selection). No point in thinking about what the selectors are doing and all," Rohit added.

Asked whether he was surprised by his axing from the Test squad against Afghanistan, he replied: "I was not. As I said, I can only keep enjoying my game. There's no time to regret about anything. I've had enough time to regret in the past. We have got big events coming up, so best to focus on it."

Rohit also didn't have the best of IPL this season while leading last year's champions Mumbai Indians, failing to take his side to the play-offs.

And the flamboyant right-hander admitted that he failed to live up to his own expectations with the bat.

"A disappointing campaign without a doubt. I said many a times during the season that this team was much, much better. I think we had a much better squad than most of the other teams who went on to qualify also. But again, we have ourselves to blame for it. We made too many mistakes," he said.

"And personally for me, it was not a great season. I expected a lot from the standards I have set for myself and the kind of performance I have had lately. I gave myself full chance to go out there and do what I could.

"I started off well with a few innings and then towards the end when it was needed the most, it didn't happen, so that was disappointing," he said.

He was particularly critical about his short selection.

"Shot selection," said Rohit when asked his area of concern with his batting in the just-concluded IPL.

"But again, shot selection is something that will be talked about when the results are not going your way. But those shots when I play in the first over of the match and it goes out of the stadium, it gets you that momentum the team is looking for.

"You have to back yourself to do that. I backed myself but it didn't come off. When it comes off, you win games; when it doesn't, you lose. I have been in that situation too often," he added.

Rohit refused to buy the theory that he is a white ball specialist.

"By no means. As a child, all I dreamt of was to play Test cricket and that dream will never be over. Nobody can take away my game or what I think about the game," an agitated Rohit said.

Rohit termed Mumbai Indians' performance this season as "inconsistent" and said it's time to reflect upon the year and come out stronger in the next edition.

"I thought we were a little inconsistent in whatever we did as a team. We should have put out hands up when needed, including myself, but that didn't happen, so that was disappointing," he said.

"But again, these things can happen and all you can do is to learn from it and be better at when you are thrown into that situation again."

Mumbai Indians finished 5th in the IPL points table and failed to qualify for the playoffs.

Comments
Topics mentioned in this article
India Cricket Team Mumbai Indians Rohit Sharma Cricket
Get the latest Cricket news, check out the India cricket schedule, Cricket live score . Like us on Facebook or follow us on Twitter for more sports updates. You can also download the NDTV Cricket app for Android or iOS.