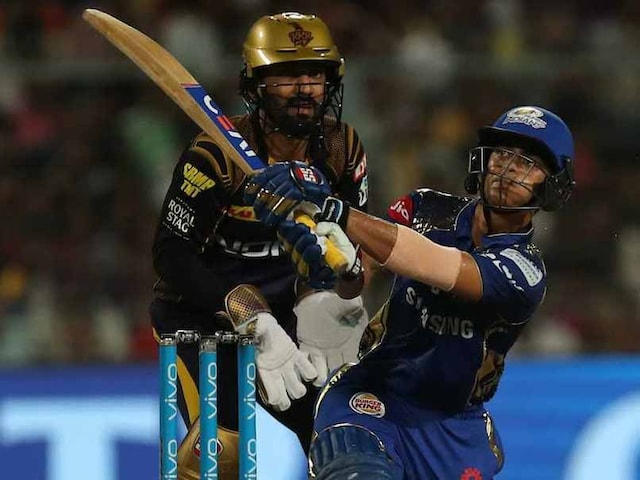 Ishan Kishan showed some brilliant skills with the bat and scored 62 off just 21 balls to help his team Mumbai Indians (MI) crush Kolkata Knight Riders (KKR) by a whopping 102 runs on Wednesday. Ishan credited MI skipper Rohit Sharma and the franchise for backing him. "It's always good for a youngster to bat up the order and when your skipper and the franchise is backing you, it's just about playing your game. I am comfortable batting anywhere," Kishan said at the post-match press conference on Wednesday.

MI were 62 for 2 after nine overs when Ishan joined skipper Rohit Sharma at the crease. Rohit's message to Kishan was pretty simple -- "back yourself and attack".

"Coach also said in the time-out that just be yourself, back yourself and that we needed some good hits today. Rohit bhai also said, 'You can hit well, just look at the ball and go with the flow'.

"They knew if I remained there I could get a lot of runs. I just had to look at the ball till the last moment and keep it going," the 19-year-old Jharkhand southpaw said.

Kishan and Rohit scored 82 for the third wicket in which the latter contributed just 18.

One of the highlights of Ishan's innings came in the 14th over when he took on Kuldeep and smashed him for four successive sixes. The over saw 25 runs coming off it.

"Kuldeep is outgoing for me (bowls the delivery that turns away from me) but he loves to bowl the googly at me. I've played him earlier as well. So I knew he was trying to get the ball outside the off stump," Kishan said about his plans to counter KKR's left-arm spinner.

"My target was that if I get the ball in my arc, I would hit it out of the park. It was like 'keep watching the ball'. If you get the ball, hit, otherwise you can go for a single as well. Rohit was batting with me, so there was no problem. I knew if I don't score, he can cover up," he added.