James Vince top-scored for the tourists with 59, notching his maiden T20 half century as England chased down New Zealand's 154-run target in 18.3 overs. 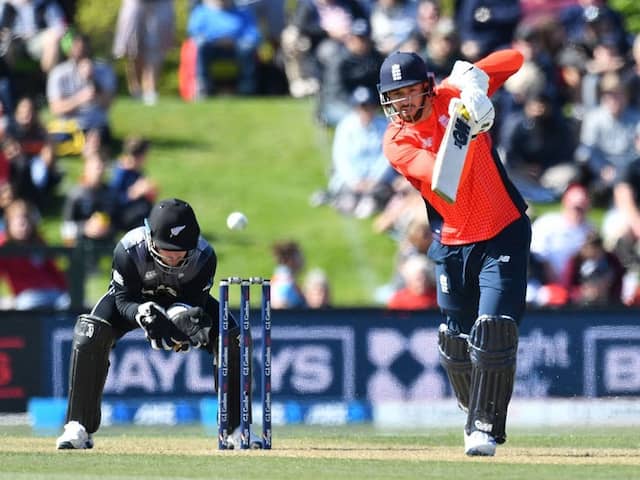 New Zealand vs England: James Vince starred with the bat for the visitors.© AFP

A maiden half century from James Vince powered England to a convincing seven-wicket victory over New Zealand in the opening Twenty20 international in Christchurch on Friday. Vince top-scored for the tourists with 59 as England chased down New Zealand's 154-run target in 18.3 overs to take a 1-0 lead in the five-match series. While Vince's man-of-the-match performance caught the eye, captain Eoin Morgan was also full of praise for his bowlers, who laid the platform for victory by restricting the Black Caps to 153 for five. "The game was won and lost in the first innings... James Vince played outstanding well but all credit to the bowlers today," he said.

A three-wicket haul from spinner Mitchell Santner was not enough to rescue the Black Caps, whose batting line-up failed to fire after Morgan won the toss and sent them in.

England's win came despite the absence of several senior players, who have been rested for the series after a gruelling period that saw them win the World Cup and fail to reclaim the Ashes.

A trio of debutants in the team facing New Zealand fitted in seamlessly, with Sam Curran and Pat Brown both snaring a wicket each.

All-rounder Lewis Gregory was not needed with either bat or ball and will hope to make an impression when hostilities resume in Wellington on Sunday.

Morgan said his squad was building its depth by blooding youngsters ahead of the T20 World Cup in Australia next year.

"It's a chance for them to stake their claim," said the England captain, who emphatically ended the match with a six off the final ball to finish on 34 not out.

New Zealand's regular captain Kane Williamson is out of the series with a hip injury and the Black Caps sorely missed his batting prowess.

Stand-in skipper Tim Southee said there was room for improvement in bowling, batting and fielding.

"We were probably a little bit off in all three areas," he said.

"We got a score on the board that we felt we could defend but we were a little bit off with the ball and in the field, which didn't help."

The poor form that dogged Martin Guptill at the World Cup continued when Curran coaxed an inside edge that crashed into middle stump.

Fellow opener Colin Munro tried to break the shackles but was too aggressive against Chris Jordan and was caught on the boundary for 21.

In reply, Jonny Bairstow made a positive start for England and it took a spectacular catch from Guptill for dismiss him for 35.

It is the first time the sides have met since the one-day World Cup final in July, which ended with scores tied but England claiming victory because they had scored more boundaries.

However, both teams insist their focus for the series is on preparing for next year's T20 World Cup.

England are ranked second in the world in T20s behind Pakistan, while New Zealand are sixth.

James Vince New Zealand vs England, 1st T20I Cricket
Get the latest updates on IPL 2020, check out the IPL Schedule for 2020 and Indian Premier League (IPL) Cricket live score . Like us on Facebook or follow us on Twitter for more sports updates. You can also download the NDTV Cricket app for Android or iOS.