After being spotted in Jaipur, MS Dhoni has now been seen in the United States (US) along with his India teammate Kedar Jadhav. 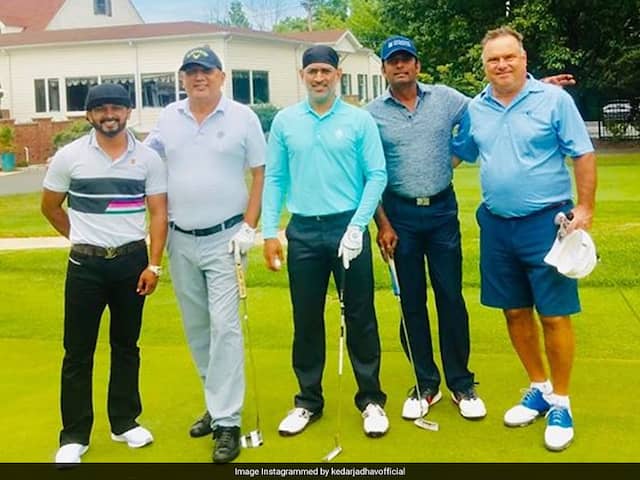 MS Dhoni was seen in action on a golf course in the US.© Instagram

MS Dhoni was seen in action on a golf course in the US. Sporting his new look, which was last seen in Jaipur recently, MS Dhoni was seen in a picture on Instagram of him and teammate Kedar Jadhav playing golf. Dhoni can be seen wearing a black bandana and sporting a salt-and-pepper stubble, with a golf club in his hand. Kedar Jadhav, who is also MS Dhoni's Chennai Super Kings teammate, dedicated his Instagram post to hockey legend Major Dhyan Chand on occasion of the National Sports Day. "Happy #NationalSportsDay to all of you. Remembering Dhyanchand Ji, the wizard of hockey... #nationalsportsday," Jadhav captioned the picture.

Happy #NationalSportsDay to all of you. Remembering Dhyanchand Ji, the wizard of hockey... #nationalsportsday

Jadhav has not been included in India's Test squad which is currently touring the West Indies. While former India captain MS Dhoni has taken a two-month break from the sport.

After completing his stint with the Indian Army, MS Dhoni was spotted in Jaipur. According to a report in IANS, Dhoni had reached Jaipur on Saturday to attend an event as fans crowded the airport.