MS Dhoni and Virat Kohli were also seen sharing a laugh during the practice session ahead of the first ODI against Australia. 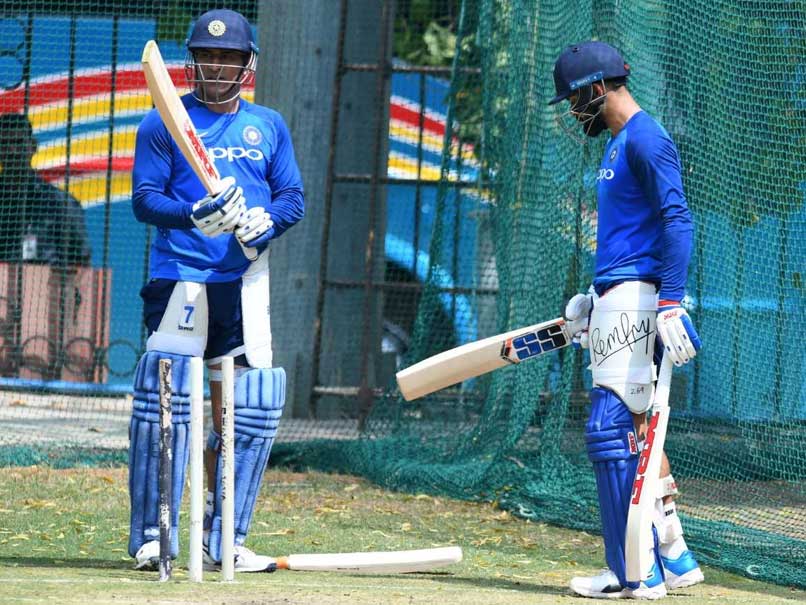 MS Dhoni and his successor Virat Kohli once again displayed their camaraderie.© AFP

Former Indian skipper MS Dhoni and his successor Virat Kohli once again displayed their camaraderie off the field as they exchanged their respective bats during a practice session ahead of the first One-day International (ODI) against Australia in Hyderabad on Saturday. Dhoni and Kohli were also seen sharing a laugh and warming-up together during the practice. India's limited-overs deputy captain Rohit Sharma, premier pacers Jasprit Bumrah and Mohammed Shami along with young Rishabh Pant also attended the practice session.

The five-match ODI series against Australia will commence after the hosts lost 0-2 to Australia in the Twenty20 Internationals (T20Is) series.

Kohli and Dhoni had forged a 100-run stand for the fourth wicket during the second T20I. Kohli had scored an unbeaten 72 off 38 balls while Dhoni played the supporting role well with 40 off 23 balls during the match.

The duo will also play important roles for the hosts in the ODIs against Australia with their experience.

While Dhoni holds an experience of 338 ODIs under his belt. He has amassed 10,415 in this format with the highest score of an unbeaten 183. He has scored these runs at an average of 50.80.

The ODI series against Australia will also be India's final International assignment before the ICC World Cup 2019.