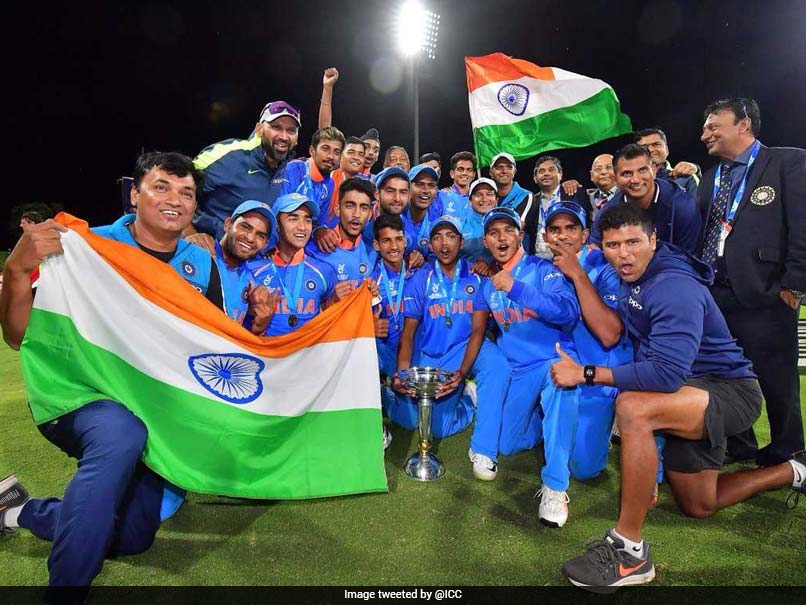 India beat Australia in the final to clinch the U-19 World Cup for a record fourth time.© Twitter

A brilliant display with both the bat and ball helped India blow away Australia in the ICC Under-19 World Cup final to become the first team to clinch the title four times. Australia, who elected to bat after winning the toss, were bowled out for an under-par 216 in 47.2 overs. Ishan Porel, Shiva Singh, Kamlesh Nagarkoti and Anukul Roy took two wickets apiece to restrict the Australians. The Indian team, coached by Rahul Dravid, put in a clinical batting display with Manjot Kalra smashing an unbeaten 101 off 102 balls. India (220/2) reached the target with eight wickets in hand and 11.1 overs to spare as they completely outclassed the Australians on Saturday.

Chasing 217 to win, openers Shaw and Kalra once again gave India a solid start. However, the chase was interrupted by rain with the score on 23 for no loss after four overs. It proved to be just a brief nusiance for the Indian openers as they come out after the rain break and smashed the Australian bowlers to all parts of the ground.

Kalra was especially aggressive with his strokeplay as India motored towards the target. India suffered their first setback Shaw fell to Will Sutherland in the 12th over with the score on 71.

India's top scorer Shubman Gill walked out and immediately hit the ground running with some delightful shots. Kalra and Gill added 60 runs for the second wicket in no time to dismiss any chance of an Australian revival.

Gill played some Virat Kohli-style shots and enthralled the majority Indian crowd at the Bay Oval in Mount Maunganui. The Australian bowlers had no answers as the Indian duo constantly peppered the boundary.

Gill finally fell for to Param Uppal for 31 off 30 balls but by that time the damage had been done and there was no way back for Australia.

Kalra continued in his merry making ways and notched his second half-century of the tournament.

He was joined by wicketkeeper batsman Harvik Desai and the duo notched up an unbeaten 89-run stand to take India past the finishing line. Desai hit the winning runs with a boundary off the bowling off Will Sutherland to finish the match off in style.

Jonathan Merlo top scored for the Australians with a 102-ball 76, laced with six boundaries even as the Indian bowlers complemented each other well to bundle out the opposition in 47.2 overs.

Electing to bat after winning the toss, the Australians lost their three top batsmen with just 59 runs on the board, thanks to pacer Ishan Porel's twin strikes early on.

Thereafter, Merlo and Param Uppal (34) steadied the team with a 75-run fourth wicket partnership, which saw them going past the 100-run mark, before left-arm spinner Anukul Roy ended Uppal's 58-ball stay with a brilliant catch on his own follow through.

Stuttering at 134/4, Merlo was joined by Nathan McSweeney (23), and the duo added 49 runs for the fifth wicket before the latter met with the same fate as Uppal, this time caught and bowled by the other spinner Shiva Singh.

Despite losing his partners at the other end, Merlo continued to torment the Indians, raising his maiden half-century off 60 balls by chopping a slower delivery from Porel for a single to sweeper cover.

Merlo, however succumbed under the pressure of scoring quick runs, when he attempted a reverse sweep off Roy only to manage a top-edge for Shiva to grab at sweeper cover.

Comments
Topics mentioned in this article
India U19 Australia U19 Shubman Gill Manjot Kalra Prithvi Shaw Cricket
Get the latest updates on ICC T20 Worldcup 2022 and CWG 2022 check out the Schedule, Live Score and Medals Tally. Like us on Facebook or follow us on Twitter for more sports updates. You can also download the NDTV Cricket app for Android or iOS.