"What Ever Happened To The 'Luck of the Irish'?": Kevin O'Brien Smashes His Own Car Window With Massive Six

Big-hitting Ireland batsman Kevin O'Brien smashed a six into his own car window during a domestic Twenty20 match on Thursday. 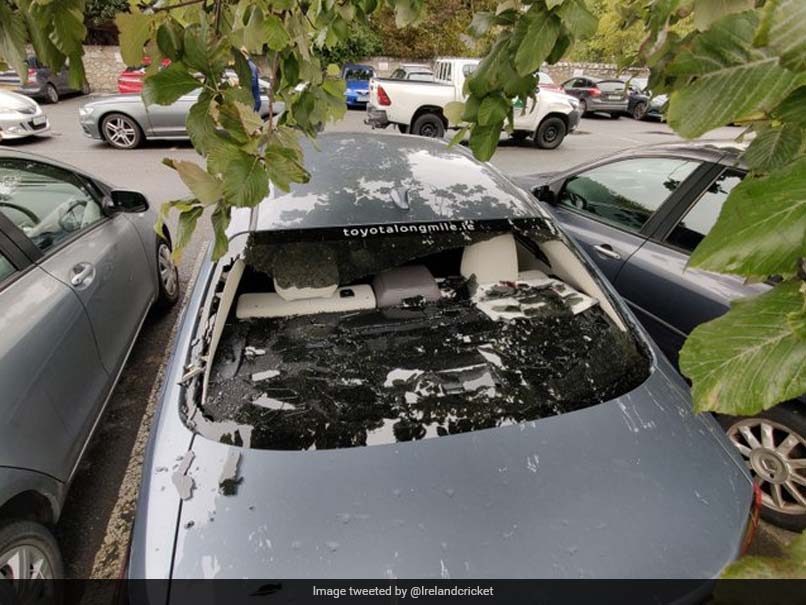 Kevin O'Brien smashed the rear window of his own car while hitting a six.© Twitter

Kevin O'Brien has made a living from smashing bowlers to all parts of the ground. The Ireland batsman has won many a games for his country, thanks to his ruthless hitting. On Thursday, Kevin O'Brien, playing for Leinster Lightning, smashed a whirlwind 82 off just 37 balls, including eight sixes, during a domestic Twenty20 match in Dublin. While the North-West Warriors bowlers were being bullied around, O'Brien's car, which was in an adjoining car park, too ended up bearing the brunt of its owner's power-hitting.

During the match, the Irishman struck a massive six that sailed into the car park, and smashed into the rear window of his car at Pembroke Cricket Club.

Cricket Ireland's Twitter account posted a picture of O'Brien's damaged car, although the 36-year-old O'Brien had the consolation of helping Leinster secure a win.

Cricket Australia's Twitter account had a cheeky reaction to O'Brien's very expensive six, tweeting: "What ever happened to the 'Luck of the Irish'?"

What ever happened to the 'Luck of the Irish?https://t.co/nDsVx6gI8D

The match had been reduced to 12 overs a side due to rain interruptions. O'Brien opened the innings after his team were put into bat and began his onslaught from the word go.

His power-packed knock helped Leinster post 124 for four with Simi Singh chipping with a run-a-ball 25.

The North-West Warriors didn't have the best of starts in the chase, losing opener Nathan McGuire on the second ball for a duck.

William Porterfield's 30-ball 50 kept his team in the hunt for a while, but the Warriors kept losing wickets at regular intervals, finally ending up with 104 for eight.

Kevin O'Brien Cricket
Get the latest updates on IND vs NZ 2021, check out the Schedule and Live Score . Like us on Facebook or follow us on Twitter for more sports updates. You can also download the NDTV Cricket app for Android or iOS.