Centuries from Paul Stirling and Andrew Balbirnie inspired a record Irish run-chase in a shock seven-wicket win over the world champions England on Tuesday. 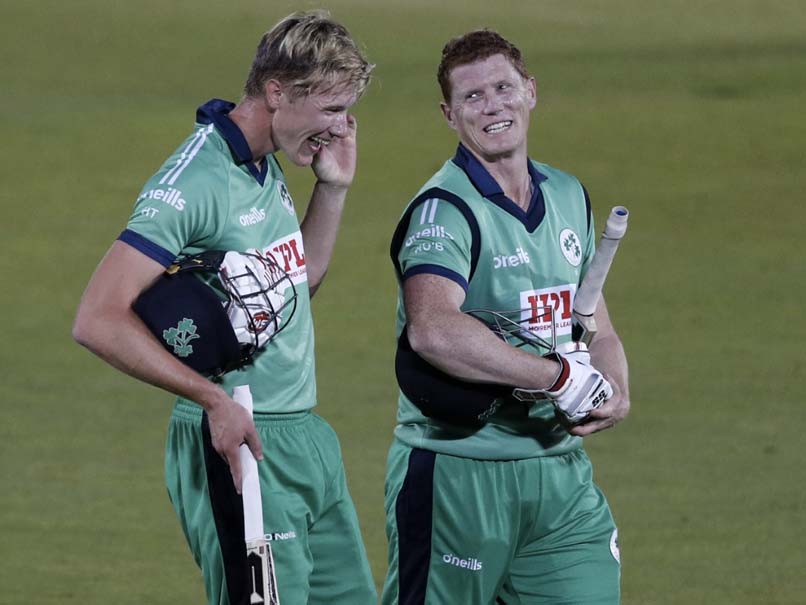 Ireland successfully chased down the target of 329 runs against England on Tuesday.© AFP

Paul Stirling insisted he always believed Ireland could beat England after his brilliant century inspired a record Irish run-chase in a shock seven-wicket win over the world champions during the third one-day international at Southampton on Tuesday. Both Stirling, with 142, and Ireland captain Andrew Balbirnie (113), scored centuries during Ireland's ultimately successful pursuit of 329. It was Ireland's highest successful chase in ODIs, after they reached a target of 328 in a dramatic 2011 World Cup win over England in Bangalore.

When both Stirling and Balbirnie were out in quick succession, however, it looked like Ireland might falter but Kevin O'Brien -- their hundred hero in India nine years ago - helped see them to victory in the company of novice international Harry Tector with just one ball to spare.

"We've chased over 300 a number of times, so we knew we could do it," said opener Stirling, the player of the match.

Balbirnie added: "We absolutely thought we could chase it, we just knew we had to bat well up top.

"We are delighted with how it finished. We obviously didn't perform with the bat in the first two ODIs."

Ireland's win was all the more impressive as they had lost the first two matches in a three-game series after making lowly totals of 172 and 212-9.

And that's why although England were without several World Cup winners including Test skipper Joe Root, all-rounder Ben Stokes and pace bowlers Jofra Archer, Mark Wood and Chris Woakes because of overlapping red and white-ball commitments -- the first Test against Pakistan in Manchester starts on Wednesday -- few would have given the Irish much hope.

This was Ireland's first ODI win over England in England and their first against a major nation since the 2015 World Cup.

Earlier England captain Eoin Morgan, a former Ireland batsman, made 106 against his native country after being dropped by opposing skipper Balbirnie on 67.

But with England eyeing an impregnable total, they lost three wickets for 13 runs in declining from 190-3 to 203-6 before being dismissed for 328.

Ireland's victory, which rounded off the first ODI series since the coronavirus lockdown, also gave them 10 points in the new World Cup Super League, which will determine qualification for the 2023 50-over showpiece in India.

- 'Outplayed' -
England did not help themselves dropping Stirling on 95 and 139.

They also bowled several costly wides and no-balls late on, with player of the series David Willey's 10 overs on Tuesday costing an expensive 70 runs.

"Full credit to Ireland, they've outplayed us today. I thought we had an average day," said Morgan. "We stuttered throughout."

But Stirling was run out backing up to end a superb 128-ball innings featuring nine fours and six sixes before Balbirnie, whose hundred came off exactly 100 balls, holed out in the deep off leg-spinner Adil Rashid.

But both Tector and O'Brien hit valuable boundaries as Ireland got the target down to eight runs off six balls, with paceman Saqib Mahmood bowling the last over.

With Ireland needing three runs from four balls, and Mahmood promptly bowled a high full toss that was called a no-ball and from which Ireland took a further run off the bat.

O'Brien then hit the winning run when he thrashed Mahmood through backward square leg.

England were in trouble at 14-2 when Dublin-born left-hander Morgan came in after the loss of openers Jason Roy and Jonny Bairstow.

But he went on to share a fourth-wicket stand of 146 with Tom Banton, whose 58 was his maiden ODI fifty.

Kevin O'Brien Cricket
Get the latest updates on ICC Women's Cricket World Cup 2022 and IPL 2022, check out the Schedule , Live Score and IPL Points Table. Like us on Facebook or follow us on Twitter for more sports updates. You can also download the NDTV Cricket app for Android or iOS.