Jonny Bairstow smashed a 21-ball half-century, going on to make a dashing 82 as England beat Ireland by four wickets in the second ODI at Southampton. 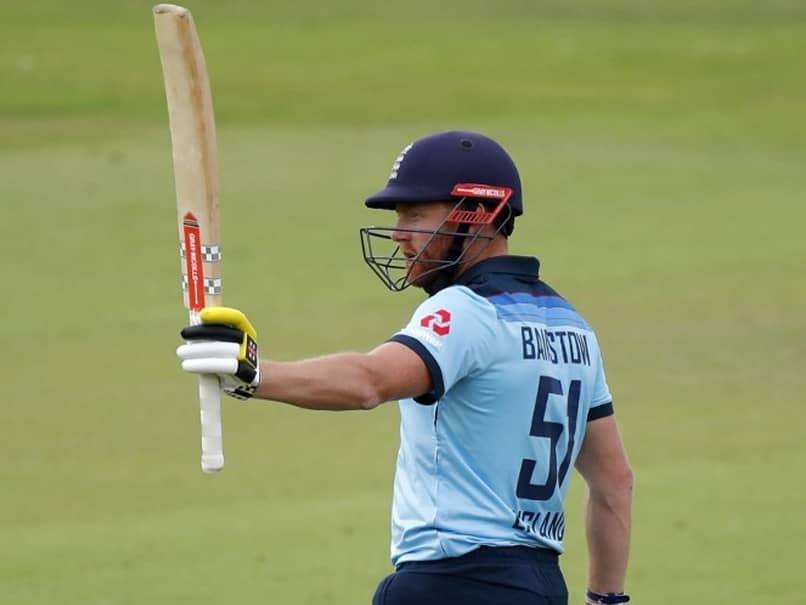 A 'revved up' Jonny Bairstow put the disappointment of his Test axe behind him as he equalled the England record for the fastest one-day international fifty during the world champions' four-wicket, series-clinching, win over Ireland in Saturday's second one-day international at Southampton. Bairstow's 21-ball half-century equalled skipper Eoin Morgan's mark against Australia at Nottingham two years ago and he went on to make a dashing 82. With England's red and white-ball fixtures overlapping, they are operating two separate squads with the first Test against Pakistan at Old Trafford starting on Wednesday.

And player of the match Bairstow, currently out of Test consideration, told Sky Sports: "Sometimes I just need a bit of a rev up every now and again whether that be picking a fight with something on the field or external motivators."

The wicket-keeper, who went to fifty with a straight six off spinner Andy McBrine, added: "I want to be at the 2023 World Cup and help us retain the trophy."

Both former Ireland batsman Morgan and Moeen Ali fell for ducks as Josh Little -- only playing because of Barry McCarthy's knee injury -- followed his dismissal of Bairstow by striking twice in four balls to leave England wobbling at 137-6.

But Sam Billings, who saw England home to a six-wicket win in Thursday's series opener, made 46 not out and David Willey, already a thorn in Ireland's side with the ball, 47 not out.

The pair shared an unbroken stand of 79 as England won with more than 17 overs remaining.

Victory left England 2-0 up in a three-match series that concludes at the Ageas Bowl, the venue for a trio of matches being played behind closed doors because of the coronavirus, on Tuesday.

Billings might not have been playing this series had Kent colleague Joe Denly been fit.

"Jonny was outstanding at the top and Sam finished it off yet again which shows the amount of depth we have," said Morgan.

Meanwhile Ireland skipper Andrew Balbirnie admitted his side were "ultimately short (of runs) and those four or five early wickets again didn't help".

Earlier leg-spinner Adil Rashid, a Yorkshire team-mate of Bairstow and Willey, took a fine 3-34 from 10 overs as Ireland were held to 212-9.

Curtis Campher again rescued Ireland from a top-order collapse, with his 68 following the South Africa-born all-rounder's 59 not out on debut on Thursday.

Balbirnie, asked if Campher might now be promoted up the order, replied: "It is definitely something we are going to talk about –- he has really showed us how to go about it.

"I thought he batted brilliantly. His tempo was really good...He has also impressed with the ball. He's an exciting prospect."

Campher came into bat with Ireland again deep in trouble at 78-5 but responded with a classy 87-ball innings featuring eight fours.

This series also launches the new World Cup Super League, which will determine qualification for the 2023 50-over showpiece in India.

Eoin Morgan Sam Billings England vs Ireland, 2nd ODI Cricket
Get the latest updates on India vs England Series, India vs England , live score and IPL 2021 Auction . Like us on Facebook or follow us on Twitter for more sports updates. You can also download the NDTV Cricket app for Android or iOS.