As reaction to James Faulkner's "boyfriend" post gained momentum, he took to social media again saying "there seems to be a misunderstanding". 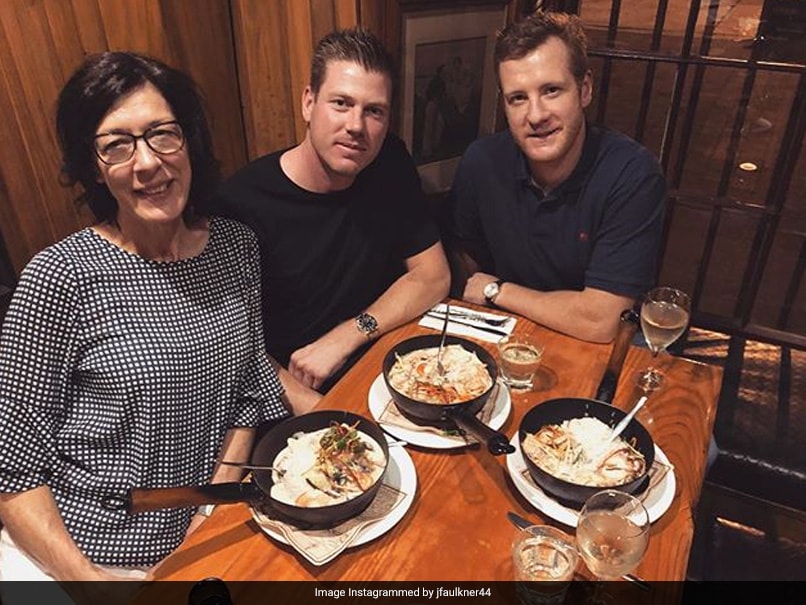 James Faulkner shared a picture showing him celebrating his birthday with his mother and "boyfriend".© James Faulkner/Instagram

James Faulkner, Australian all-rounder, caused massive confusion after he shared a picture late on Monday, showing him celebrating his 29th birthday with his mother and "boyfriend" Rob Jubb. The Australian cricketer's ambiguous post was seen by many as James Faulkner's way of revealing his sexual orientation, which would have made him one of the first Australian cricketers to be openly gay. James Faulkner's post was not only welcomed by the LGBT community but fellow cricketers including Glenn Maxwell, Brett Lee and Shaun Tait also led an outpouring of support and said he had shown "great courage" coming out. However, James Faulkner, in a follow-up Instagram post, clarified he wasn't gay, which didn't go down too well with some fans.

The Australian and the international media initially reported James Faulkner's homosexuality as fact.

Faulkner, however, later edited the caption of his Instagram post, adding "best mate!!!" in brackets after the word "boyfriend".

Birthday dinner with the boyfriend (best mate!!!) @robjubbsta and my mother @roslyn_carol_faulkner#togetherfor5years

The player also tweeted the photo and the same caption, but has not updated his tweet to include the words "best mate".

"Good on ya mate. Have a lovely birthday Jimmy," said Brett Lee.

But as reaction to Faulkner's post gained momentum, he took to social media again saying "there seems to be a misunderstanding".

There seems to be a misunderstanding about my post from last night, I am not gay, however it has been fantastic to see the support from and for the LBGT community. Let's never forget love is love, however @robjubbsta is just a great friend. Last night marked five years of being house mates! Good on everyone for being so supportive.

James Faulkner's clarification post was not well received by some fans.

"Yeah, I don't think you're getting support from the LGBT community from this, pal. We're not a joke. Struggled to be taken seriously (let alone acknowledged legally) for years. "Gay lol" is pretty infantile from an elite athlete wearing the national colours," commented blakeerickson.

"Disappointing that you & your cricketing mates can make a joke out of what is a struggle for many..Next time you post a 'joke' try to make it funny and not an insult to a community," wrote themikeycole.

"Highlights how behind cricket Australia is and the culture surrounding sports at the moment. It may have been a facetious post but there are a large number of men in sports that have been and continue to be ostracised and ridiculed for their sexual orientation. To use that as a joke is definitely not a hate crime but is in poor taste a few news outlets, which may not be credible but have a huge impressionable audience broke the headline "Australias first openly gay cricket player", it's a shame that something considered groundbreaking and significant was due to some guys having an inside joke. As someone in the public eye and a role model to young men you should take accountability and also highlight the problems surrounding your sport and the issues the LGBTQI community face. Not just brush it off as a post taken out of context," said goodgrlmimi_.

"Can I just say in response that I am so pleased and happy for you that the relationships and marriages we had fought for so hard, and for so long, provide you with such a fun punchline for your social media," commented stephensander.

"Did you miss the homophobia rampant in the comments? I went to that post thinking 'Shit, I don't know of any professional cricketers in this hemisphere who are like me!" It was one of those moments when the feeling of otherness goes away. And then the homophobia hit me. And then it was just a joke. Just banter. Mate, I get it was an unintended consequence of a personal in-joke. But when you chuck it on a public platform, invite the bigots to express their disgust over a sexual orientation you don't even have? It's pretty bloody painful for those of us who have to live with that every day," wrote jackremiel.

"Then why didn't you write best mate instead of boyfriend?," wrote r.gregor17.

"It's a shame you think it's okay to mock GLBTIQ relationships. I have removed my "like". Young people who are struggling with their sexuality might have seen hope and support in your post. It's not a joke. You're the joke. Your mother must be so proud," wrote thebassetthound_au.

"Completely understand that you did not intended to cause any harm. However, your post is an example of the "ladsy" sporting culture that needs to be eradicated so players can authentically be themselves. The post made a mockery of any closeted gay/bi athlete, thereby mocking the LGBTIQ community. It's 2019. Ignorance is no longer an excuse," wrote gagagreene.

"Very disappointed. How can you really be that clueless that you "coming out" on social media is not going to be treated like a big moment. The LGBTQ community continues to struggle with mental health, with family and so many other things. This is not something to joke about. I hope you have learned a valuable lesson from this major screw up," said lpfpod.

"Wouldn't call it a misunderstanding. It was a poor joke," wrote laurenfarrell17.

"You are an absolute cretin mate, taking the piss like that and now that grovelling back tracking post. No wonder barely any pro athletes have the nerve to come out. Sexuality is never a laug

Cricket Australia denied Faulkner's post was a misguided attempt at humour, saying both the player and the organisation recognised coming out could be "an incredibly emotional time".

"The post was not in any way meant to make light of this and, though the support from the community was overwhelming and positive, Cricket Australia apologises for any unintended offence," it said.

Faulkner has played one Test, 69 one-dayers and 24 Twenty20 matches for Australia, last representing his country in late 2017.

Glenn Maxwell Cricket
Get the latest updates on Fifa Worldcup 2022 and check out  Fifa World Cup Schedule, Stats and Live Cricket Score. Like us on Facebook or follow us on Twitter for more sports updates. You can also download the NDTV Cricket app for Android or iOS.