Virat Kohli holds an edge over Sachin Tendulkar when it comes to the art of scoring big runs while chasing totals. 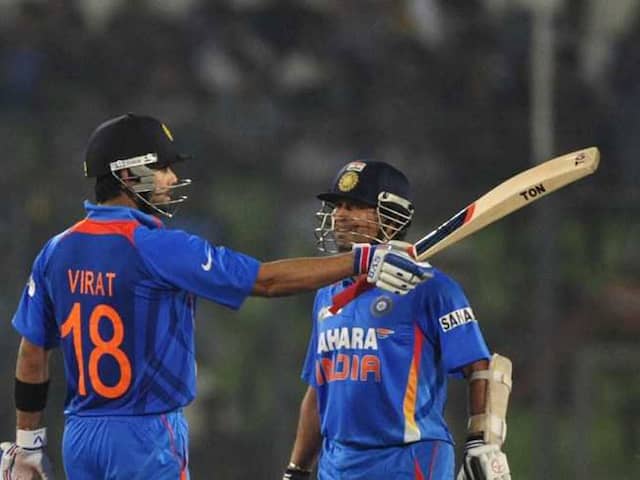 Virat Kohli has more number of ODI centuries while successfully chasing down a total.© AFP

Shane Warne, mentor of Rajasthan Royals (RR) in the Indian Premier League (IPL) 2018, thinks that Indian cricket has come a long way in term of performance and the talent pool India currently has, makes them one of the strongest teams in world cricket. Captain Virat Kohli, with his performance and leadership role, has breathed new life in the young Indian team, making them fearless and fierce on field. Warne went a step further in praising Kohli and said that even cricket legend Sachin Tendulkar could not do what the current Indian team captain has done while chasing down totals in One-day Internationals (ODIs).

"I think the way Virat plays and you look at his numbers and it's uncanny how many times he has got hundreds in ODI cricket chasing totals down. I don't think anyone, not even Sachin could do what Virat's done. We know Sachin and Brian Lara were the two best players of all time in our generation," Warne was quoted as telling India Today.

"But Virat and AB de Villiers; it's very difficult to separate those guys. Virat is as good as anyone that I have seen play the game. Wonderful, terrific player, I love his energy and passion. I am sure when he finishes in ten years or so he will be spoken about in the same breath as Sachin," Warner further added.

However, in the list of most ODI hundreds, Kohli (35) still trails the Master Blaster, who has 51 ODI centuries to his name.

Comments
Topics mentioned in this article
India Cricket Team Sachin Tendulkar Virat Kohli Shane Warne Cricket
Get the latest Cricket news, check out the India cricket schedule, Cricket live score . Like us on Facebook or follow us on Twitter for more sports updates. You can also download the NDTV Cricket app for Android or iOS.