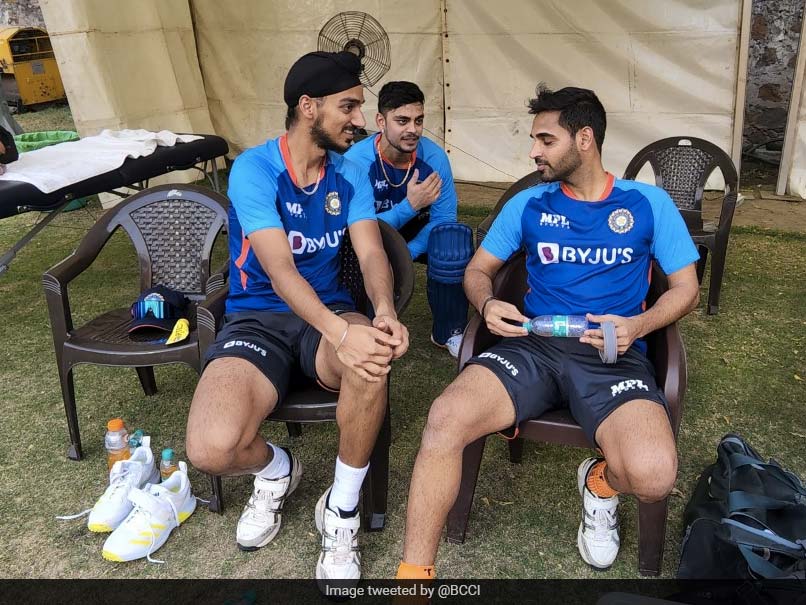 Umran Malik got an extended spell during India's first training session, but it was his colleague Arshdeep Singh who looked way more impressive at the nets, which included honing of his yorker skills. However, both the juniors might have to wait for their turn with Bhuvneshwar Kumar, Harshal Patel, Avesh Khan ahead in the pack. If push comes to shove, Arshdeep looks a better bet than Umran. The Indian team's evening session under Rahul Dravid and Paras Mhambrey was as intense as it could get.

While Umran, the toast of the nation for his express pace, bowled as quick as he can, Rishabh Pant didn't leave any opportunity to smash him with equal ferocity.

The faster he unleashed his thunderbolts, the more ferocious was Pant's intent with the willow.

Young Arshdeep first bowled a short spell and then had a session under bowling coach Mhambrey, when he was seen practicing the blockhole deliveries.

Arshdeep was supposed to hit the two 'props' as part of match simulation.

"Theek hai? (alright)," he would ask Mhambrey who would tell him to focus more on line than length.

So who was the better bowler of the two? Arshdeep certainly looked to possess multi-dimensional skill sets compared to the Jammu speedster.

Another aspect indicating that the Punjab player could be slightly ahead of Umran is the training time.

Normally, fast bowlers in extreme conditions don't go all out in training sessions and just try to bowl enough to hit the rhythm.

Bhuvneshwar Kumar, who will lead the pack, bowled for hardly 15 minutes.

Similarly, Harshal Patel, who is also a certainty was rested on the day along with two sure-shot first XI candidates, Yuzvendra Chahal and Hardik Pandya.

DK trains lap scoop Dinesh Karthik might not be a certainty going into the first game with Pant being deputy to KL Rahul but his short net session was entertaining.

At 36, Karthik knows what he needs to practice and thus asked the throwdown experts Nuwan, Daya and Raghu to provide him with deliveries that allows him to play lap scoop and reverse lap scoop over short fine and short third man fielder.

According to the DDCA groundsmen, there will be dew post 8pm but like other times, the team didn't practice with wet balls.