India vs South Africa: Rohit Sharma Praises Team For Not Backing Down In Any Situation

Rohit Sharma captained India in the T20I series decider in the absence of regular skipper Virat Kohli, who had been ruled out due to a stiff back. 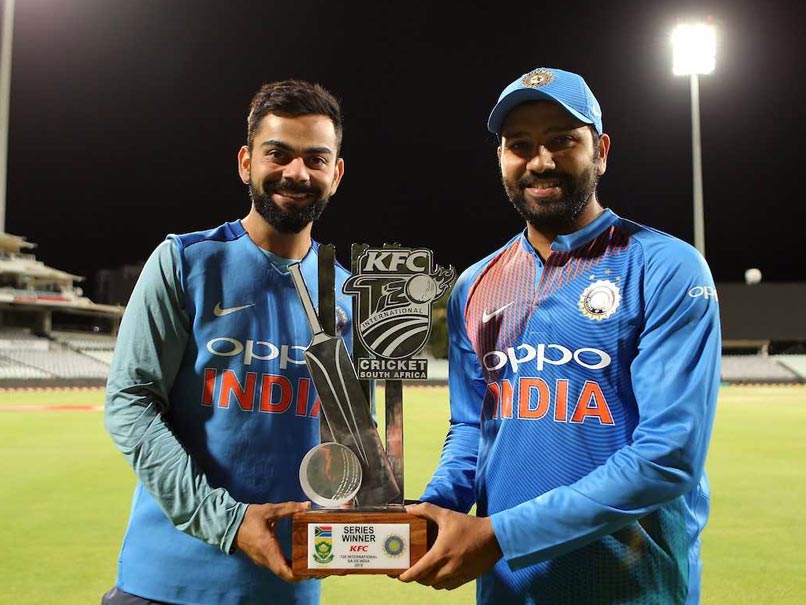 Rohit Sharma, India's stand-in captain credited the team's aggressive brand of cricket and the steadfastness to not back down from any situation as the reason for a memorable Twenty20 International series win over South Africa. India beat South Africa by seven runs in the third and final T20I at Newlands in Cape Town on Saturday night to clinch the three-match series 2-1. Rohit Sharma was captaining the Indian team for the decider in the absence of regular skipper Virat Kohli, who had been ruled out due to a stiff back.

"We will take these limited-overs trophies, throughout the series we played with a lot of aggression. As a group, we never back down from any situation. That is the reason we are standing here as winners," said Rohit.

Rohit said that he felt India were 15 runs short after being put into bat but credited the bowlers for a complete performance.

"We discussed certain plans and it worked today. The idea was to keep the ball on the stumps and we kept it tight in the first six overs. Credit to the new-ball bowlers. It was a complete bowling performance," he said.

"To be honest, we were 15 runs short. Because the way the first half went, I thought we lost our way in the end. These things happen and we learn from it. I thought it was a decent score and the bowlers did the job for us. I hope games like these teach us a lot of things."

JP Duminy, South Africa's captain praised India for dominating the powerplays with both bat and ball.

"They bowled pretty well in the Powerplay, and we just couldn't get the boundaries. The difference from their batting Powerplay and ours was 30 runs. I definitely thought 170 was chaseable," he said.

"The slower balls and the knuckle balls from them worked. I am proud of the way the guys fought, especially Jonker. It is amazing to see a lot of talent coming through. All credit to India, outstanding white-ball tour for them."

Suresh Raina, who was adjudged the Man of the Match for scoring 43 off 27 balls and taking one wicket for 27 in three overs, credited skipper Virat Kohli and coach Ravi Shastri for showing confidence in him.

"Especially in the first overs, you need to show intent. Thanks to Virat and Ravi bhai, they gave me the licence. The way we played, the dressing room atmosphere is so calm.

"The last we have done in two-and-a-half months, no team has done it in a long time. Two lefties at the crease, I got the ball, and working on it."

Bhuvneshwar Kumar, who was awarded the Man of the Series, said IPL helped him to hone his skills in the shorter format.

"Yes, I really enjoyed this tour. I was very happy with my preparation. First of all thanks to IPL, it has made an Indian bowler a thinking bowler," said Kumar, who took seven wickets, including a five-wicket haul, in the three-match T20 International series.

"It is important not to give too many runs in the first six overs. I always try to keep it simple. I hardly get these kind of wickets in India and I enjoyed this."

Comments
Topics mentioned in this article
India Cricket Team South Africa Cricket Team Virat Kohli Rohit Sharma South Africa vs India 2018 Cricket
Get the latest updates on IPL Auction 2023 and check out  IPL 2023 and Live Cricket Score. Like us on Facebook or follow us on Twitter for more sports updates. You can also download the NDTV Cricket app for Android or iOS.