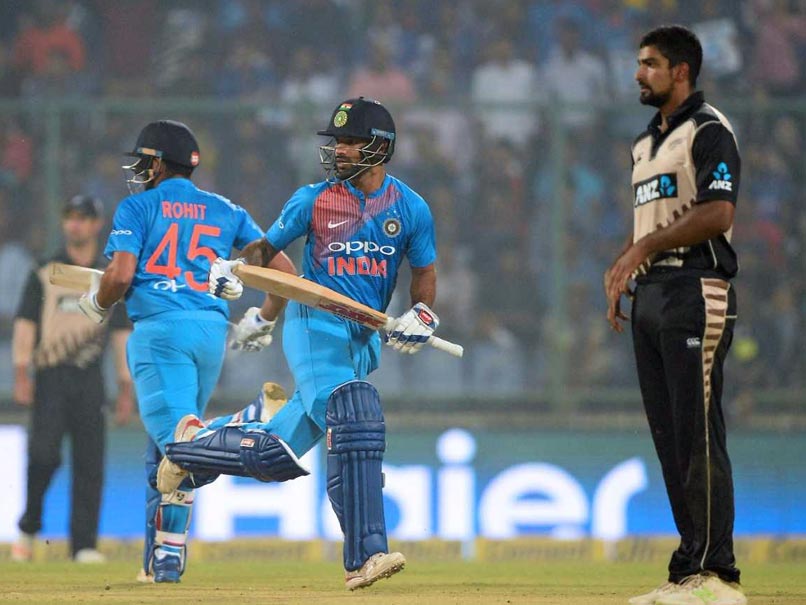 A disciplined bowling display from the bowlers in Thiruvananthapuram helped India earn their first bilateral Twenty20 series win against New Zealand as the visitors fell short by six runs in the decider to lose the three-match series 1-2 in a rain-curtailed 8-over-a-side match. Jasprit Bumrah (2/9) and Yuzvendra Chahal (8 runs in 2 overs) starred with the ball as the batsmen could not catch up with the ever-rising required run-rate. For New Zealand, Colin de Grandhomme was the only saving grace who remained not out on 17. (Scorecard)

23:10 IST: Thank you for joining us for the India-New Zealand ODI and T20I series. Do tune back in when India take on Sri Lanka for a three-match Test series starting on November 16.

23:04 IST: And it is all over! India have defeated New Zealand by six runs to clinch the three-match T20 series 2-1 at Thiruvananthapuram.

22:48 IST: OUT!Bumrah gets his second of the night, bowls on the pads, Nicholls down on one knee, sweeps and top edges the ball to Shreyas Iyer at fine-leg.

22:43 IST:Brilliant bowling from Chahal, concedes just three runs off the over.

22:39 IST: Six!Colin de Grandhomme, the new man in, hammers Kuldeep for a huge maximum straight down the ground.

22:38 IST: Out!Kuldeep gets his first, Phillips departs for 11. Dhawan at deep mid-wicket takes a good catch.

22:36 IST: Out!Attempting a cheeky single, Pandya picks up the ball with one hand and gets a direct hit on the stumps as Williamson falls short of the crease.

22:33 IST: Four!Bhuvneshwar strays on the pads, Phillips connects well for a one-drop-bounce boundary.

22:27 IST:Yuzvendra Chahal introduced in the attack.

22:24 IST: Out!Jasprit Bumrah gets the danger man Colin Munro. Trying to go big down the ground, miscues, Rohit runs back and takes a brilliant catch to breathe life back in the back.

22:21 IST: OUT!Bhuvneshwar bowls a slower delivery. Guptill fails to read, hastens into the shot, misses and the off-stump is out of the ground.

22:17 IST: Six!Munro, steps down the ground, clubs Bhuvneshwar for a huge maximum over deep mid-wicket.

22:15 IST:Welcome back to the chase. Bhuvneshwar Kumar is leading the bowling attack for India.

22:00 IST: SIX!Santner bowls in the slot to Pandya and the batsman clears his leg and sends the ball way back in the stands. Massive!

21:56 IST: OUT!India lose their fourth, Iyer takes the long walk back for 6, Sodhi gets his second.

21:54 IST: Six!Right in the slot and Pandey dispatches Sodhi for a huge maximum.

21:50 IST: Four! Room outside off from Southee, Manish Pandey slams the ball through covers for his first boundary.

21:48 IST: Out!Looking to clear the deep mid-wicket fielder, Kohli sends the ball straight down his throat. India 30/3 in 3.5 overs.

21:45 IST: Four and a six!!Kohli welcomes Ish Sodhi with two beautiful shots. Pulls the short delivery first for a boundary and then picks up the length delivery and clubs it over long-on for a maximum.

21:39 IST:Tim Southee introduced in the attack. Starts with a slower ball.

21:38 IST:New Zealand bowlers have been really good in the first two overs. India need to up the ante in order to score a competitive total.

21:36 IST: Four!Bounce for Santner, Rohit slaps the ball straight down the ground. Mid-on chases but fails to cut-off.

21:35 IST:Mitchell Santner bowling the second over.

21:32 IST: Four!Dhawan comes down the pitch and slices the ball over covers for a boundary.

21:31 IST: Beaten!Boult bowls on and around around off-stump, Dhawan looking to defend, misses the ball by a whisker. Beautiful bowling!

21:30 IST: First ball,Boult bowls on the pads and Rohit flicks it fine leg for one run.

21:28 IST:Rohit Sharma and Shikhar Dhawan opening the batting for India.

21:26 IST: Alright then!Umpires and both teams walk out in the middle.

21:10 IST:As per the new rules, four bowlers can now bowl two overs each.

21:00 IST:While it isn't raining, the main pitch has been covered once again. The umpires are all set for the inspection. We will have an update shortly.

20:58 IST: It looks highly unlikely that we will get anything more than a five-over game.

Looking good now. Hopefully an 8 over game? Great atmosphere here, deserve to get a game

20:47 IST:Players from both teams are warming up while Ravi Shastri and few other New Zealand players are having a look at the pitch.

The covers are off and Coach is heading out to have a look at the wicket! Good signs! #indvnz pic.twitter.com/rpvk4vK0h1

20:45 IST:A start before 9.30 or 9:45 is highly unlikely. It might just come down to a five-over match but we need wait till the umpires are done with the inspection. At the moment they are having a closer look at the square.

20:40 IST:The square was covered up until now but they are also being removed now. Both teams are having a close look at the square. No official word as to when the match will start.

20:24 IST:We have some good news coming in. The rain has stopped and the covers are coming off.

UPDATE: The rain has stopped and the covers are coming off now #INDvNZ

20:06 IST: We have started to lose overs now. For every 4 minutes lost, we will lose one over.

Very gentle drizzle, super soppers out. Needs to stop by around 9 for a 5 over game. (Cut-off we believe is 21.46)

19:21 IST:If the game doesn't start anytime soon then we will start losing overs.

Too much moisture #indvnz pic.twitter.com/vjikPq6hJu

18:25 IST:Sunil Gavaskar in a pre-match show says that it is still drizzling and the weather does not look good.

17:50 IST:News coming in that there is a slight drizzle in the ground right now.

Surely this drizzle isn't going to ruin the occasion for the sports lovers of Kerala. So hoping we will get a nice game

17:40 IST:Well, it seems the weather is clear and the decider will be played.

Hello and welcome to the Greenfield Stadium in Trivandrum for the decider game #INDvNZ pic.twitter.com/w5DKe0QjAA

17:23 IST:Former India cricketer Aakash Chopra took to twitter to give an update about the weather conditions.

17:21 IST:While both team aims for a series victory, rain threat looms large over the series decider at Thiruvananthapuram.

17:20 IST: Hello and welcome to the live blog of the T20I match between India and New Zealand.

In Dhoni's innings, he had scored 26 runs in boundaries from five deliveries (3x6, 2x4) and managed only 23 from the remaining 32 deliveries, which is far less than run a ball. It will be interesting to see where Kohli and chief coach Ravi Shastri slot Dhoni in the next game. A school of thought suggests that Dhoni will be suited at No 4 in case India lose early wickets as it will give him time to settle down. The Indian team's performance has been one of contrast in the first two games.

Comments
Topics mentioned in this article
India Cricket Team New Zealand Cricket Team Virat Kohli Kane Williamson India vs New Zealand Cricket Live Score Live Cricket Score Live Blogs
Get the latest updates on IPL Auction 2023 and check out  IPL 2023 and Live Cricket Score. Like us on Facebook or follow us on Twitter for more sports updates. You can also download the NDTV Cricket app for Android or iOS.