India have won all the last three encounters against Pakistan. 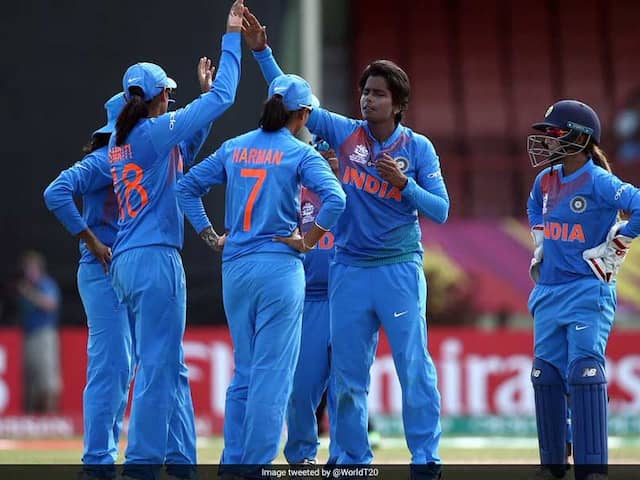 India began their ICC Women's World T20 campaign with a bang by registering a 34-run victory over World No.2 New Zealand. Now, the Indian women's team face arch-rivals Pakistan in their second group match of the tournament on Sunday. With captain Harmanpreet Kaur in scintillating form, World No.5, India would like to set the record straight after losing to Pakistan in the 2016 Women's World T20 at home. Since that loss in Delhi, India have won all the three encounters against Pakistan.

Pakistan, on the other hand, lost by a comprehensive 52-run margin to Australia in their tournament opener on Friday.

There were many positive takeaways from India's tournament opener. Jemimah Rodrigues, 18, played a calculated innings en route her fourth T20I half-century and kept rotating the strike while Harmanpreet made mince meat of the New Zealand bowlers.

The spinners accounted for eight of the nine New Zealand wickets with seamer Arundhati Reddy picking up one wicket.

Against Pakistan, India might be tempted to use a second seamer in either Mansi Joshi or Pooja Vastrakar.

Pakistan could not get the momentum they were looking for in their run chase of 153 as not a single batter could cross the individual score of 30. Bismah Maroof, 26, was the top-scorer for her team.

The bowlers also leaked runs as Beth Mooney and Alyssa Healey took them to the cleaners with a 72-run stand.

Sana Mir's off-day (0/32 in 4 overs) was one of the factors for Pakistan not being able to contain Australia during the initial overs.

Pakistan Women Harmanpreet Kaur Cricket
Get the latest Cricket news, check out the India cricket schedule, Cricket live score . Like us on Facebook or follow us on Twitter for more sports updates. You can also download the NDTV Cricket app for Android or iOS.