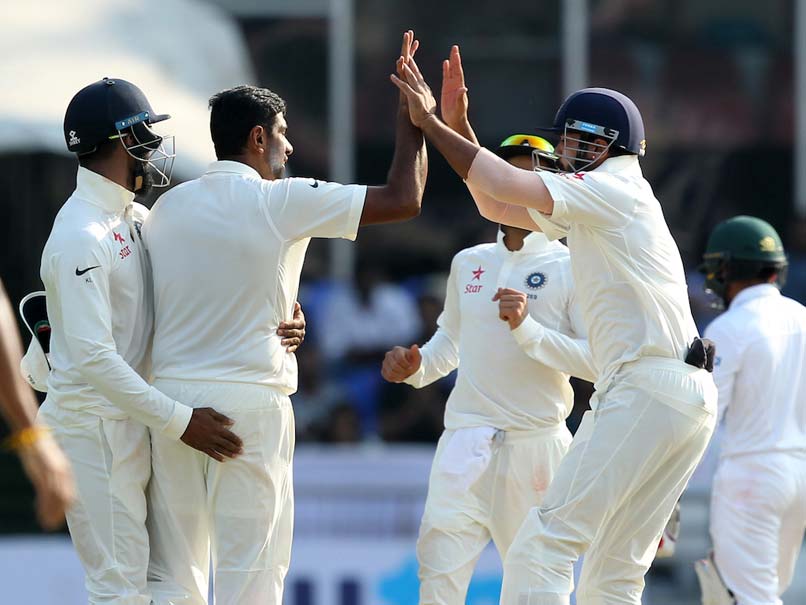 Shakib Al Hasan (21*) and Mahmudullah (9*) were fighting it out for Bangladesh as the visitors lost three wickets in the final session of the fourth day of the one-off Test match against India at the Rajiv Gandhi International Stadium in Hyderabad. Bangladesh lost Tamim Iqbal early in the last session of play while Soumya Sarkar and Mominul Haque stitched together a 60-run stand for the second wicket to halt the fall of wickets. Ravindra Jadeja broke the stand as Sarkar was caught at slips by Ajinkya Rahane who was soon followed by Haque who fell prey to Ravichandran Ashwin. Bangladesh ended the day on 103 for 3, still needing 356 runs to win the Test match while the hosts need seven wickets to complete a comprehensive victory.

Earlier, Mushfiqur Rahim (127) and Mehedi Hasan Miraz started the proceedings of the day with the intent of getting closer to the massive Indian total. But India struck early in the day by removing Hasan (51) who was cleaned up by Bhuvneshwar Kumar.

Rahim carried on from where he left as he kept the scorers busy and soon brought up his fifth Test century. Taskin Ahmed hung around with his captain as the duo added 39 runs for the ninth wicket before Ahmed was dismissed for 8. Rahim was the last man to get out as the visitors were bundled out for 388 but India decided not to enforce the follow on.

Both the Indian openers came out in search of quick runs but soon perished in the process. Murali Vijay was dismissed for 7 while KL Rahul only added 10 runs to his name, leaving India in a spot of bother at 23 for 2.

But Virat Kohli (38) and Cheteshwar Pujara (54*) added 67 runs for the third wicket in quick time, putting India back on track. Ajinkya Rahane got off the blocks quickly but lost his wicket in trying to up the ante while Ravindra Jadeja made a quick-fire 16 to take India to 159 for 4 at tea in their second innings as Kohli decided to declare.

Ashwin was the pick of the bowlers for India as he picked up two wickets, removing both Tamim and Mominul while Jadeja picked up the lone wicket of Soumya Sarkar.

Comments
Topics mentioned in this article
Cricket India Cricket Team Bangladesh Cricket Team Ravichandran Ashwin Ravindra Jadeja
Get the latest updates on India vs South Africa and check out  Schedule, Results and Live Score. Like us on Facebook or follow us on Twitter for more sports updates. You can also download the NDTV Cricket app for Android or iOS.