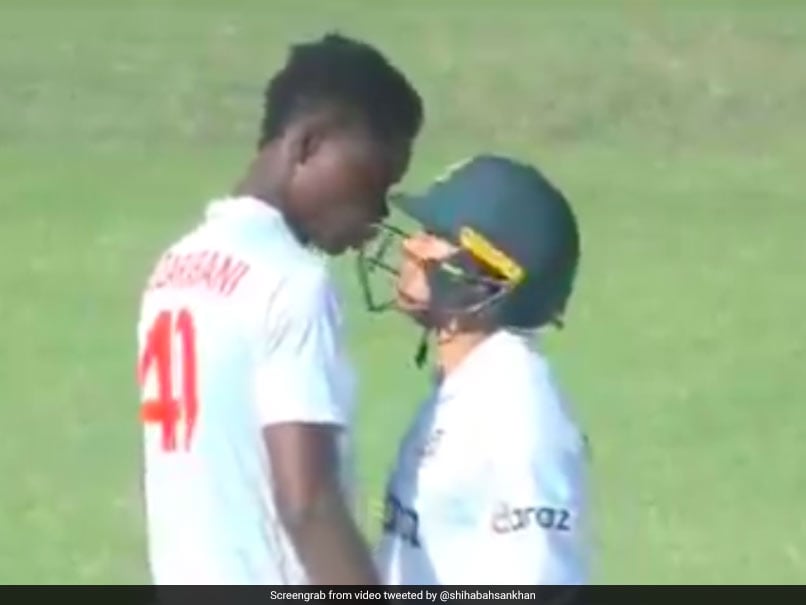 Things got heated up between Taskin Ahmed and Blessing Muzarabani.© Twiter

The one-off Test between Zimbabweand Bangladesh, being played at the Harare Sports Club in Zimbabwe, saw proceedings take an unexpected turn when a hilarious dance move by Bangladesh tail-ender Taskin Ahmed culminated into an angry spat against opposition pacer Blessing Muzarabani. Things became heated when Taksin showed off a dance move soon after leaving a short delivery, and action that didn't go down well with the bowler. Muzarabani glared at the batsman as his follow through took him right next to Taksin. Things turned uglier when both players engaged in an eyeball-to-eyeball face-off as their heads came together.

Now this is something!

Muzarabani and Taskin get into each other's faces!

Taksin looked particularly charged up as he gestured towards the bowler to return to his run-up with a smirk on his face.

Taksin ended up contributing 75 valuable runs in 134 balls as Bangladesh scored 468 runs in their first innings after winnings the toss and opting to bat.

Mahmudullah remained 150 not out off 278 deliveries while wicket-keeper batsman Liton Das missed out on a well-deserved hundred by five runs (95 off 147 balls).

For Zimbabwe, Muzarabani claimed four wickets for 94 runs in 29 overs.

When reports last came in, Zimbabwe were 210 for two wickets in 70 overs.

Takudzwanashe Kaitano was batting at 63 runs and Dion Myers on 22. Milton Shumba (41 off 83 balls) and skipper Brendan Taylor (81 runs off 92 balls) were the two wickets that fell.

Taskin Ahmed Blessing Muzarabani Cricket
Get the latest updates on Fifa Worldcup 2022 and check out  Fifa World Cup Schedule, Stats and Live Cricket Score. Like us on Facebook or follow us on Twitter for more sports updates. You can also download the NDTV Cricket app for Android or iOS.