"From Where Are You Getting The Glow": Hardik Pandya Asks Natasa Stankovic, Gets Cute Reply Hardik Pandya, India all-rounder, took to Instagram to share an adorable picture with Natasa Stankovic. In the post, Hardik asked his fiancee Natasa from where is she "getting the glow" on her face and captioned the picture "@natasastankovic__ bubs from where are you getting the glow on your face?" In reply, Natasa gave an answer to the all-rounder's query that won many hearts on social media. The Serbian actress credited Hardik Pandya's pampering and their soon-to-be-born baby for the glow.

Natasa used an emoji of a baby and wrote "and your love and pampering". 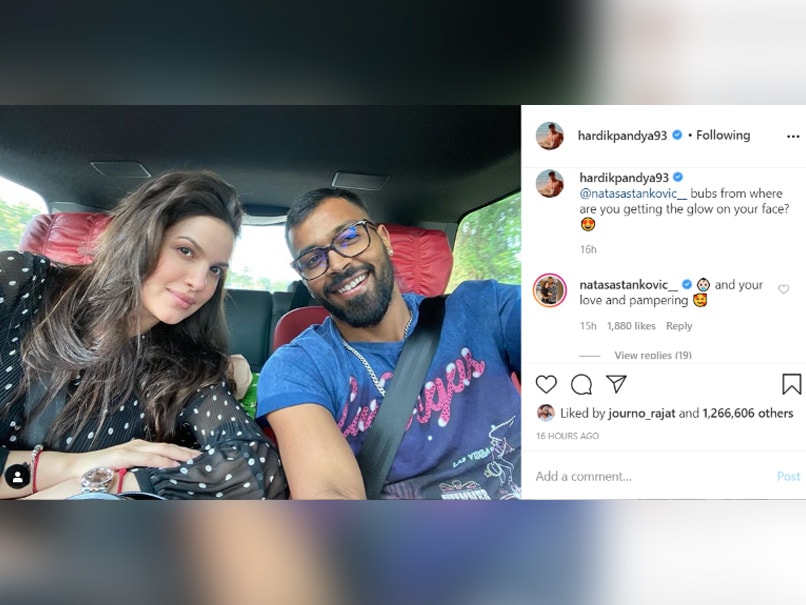 Earlier this month, the 26-year-old all-rounder took to social media to announce that the couple are expecting a baby.

Hardik and Natasa announced the news about their engagement via a social media postthat the all-rounder posted on January 1.

Hardik, who missed India's tour to New Zealand earlier this year, was looking to return to the field in the 13th edition of the Indian Premier League.

However, the Mumbai Indian's all-rounder's wait to return to action got delayed due to the ongoing coronavirus pandemic.

The Board of Control for Cricket in India (BCCI), on April 16, postponed the franchise-based tournament indefinitely as a precautionary measure against the virus.

The all-rounder, who plays for Baroda in the domestic circuit, has been quite active on social media platforms during the forced break from cricket.

From posting throwback pictures and videos to a karaoke session with his brother Krunal Pandya, Hardik has kept his fans entertained during these tough times.