Fan Asks Bhuvneshwar Kumar To Describe His Wife In Few Words. His Reply

Bhuvneshwar Kumar interacted with fans on a Q&A session on Twitter on Sunday. 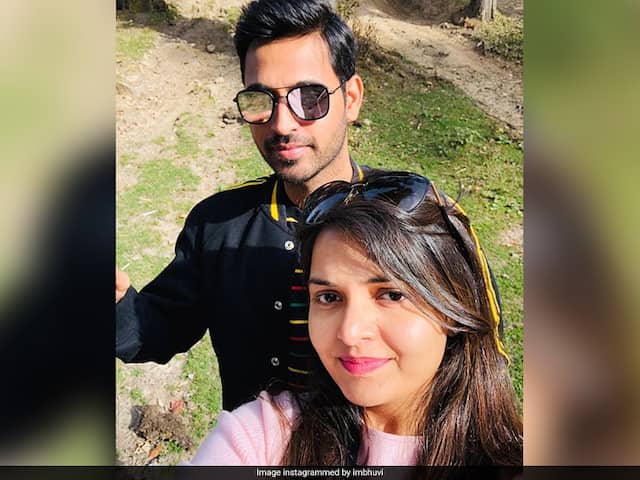 India pacer Bhuvneshwar Kumar held a Q&A session on Twitter on Sunday, where he responded to a deluge of questions from his fans. From choosing between Cristiano Ronaldo to revealing what three wishes he would ask if he found a magic lamp with a genie, Bhuvneshwar gave candid responses. When asked by a fan to describe his wife Nupur, and he came up with a heart-warming and witty response. "Describe Nupur mam with few words," a Twitter user asked him. "Intelligent, multitasking & a crazy dog lover," he wrote, before cheekily adding "Some times they come before me."

Intelligent, multitasking & a crazy dog lover. Some times they come before me. https://t.co/WC2kfZEwrK

When asked "What do you react when you see meme on you," he responded by saying "I laugh".

"Hey bhuvi... First of all I am a biggest of yours and my question to u is  if u had  Aladdin's lamp then what would be the  3 wishes which u would have asked the genie to fulfill???" one user asked.

"1. Our world gets free from COVID. 2. To let me keep one wish for emergency. 3. I would free the genie forever," he wrote in response.

"Hey Bhuvi,if u get a chance to change something in this universe,what will u change??" another fan asked.

"Universe itself is a perfect place. No need to change anything," he wrote.

"How much was your first paycheck worth? Do you remember what you did with it?" another user asked.

"It was for Rs3000. I shopped and still managed to saved some," Bhuvneshwar revealed.

Asked to choose between Messi and Ronaldo, the pacer opted for the Argentine forward.

Bhuvneshwar Kumar also weighed in on the saliva ban when asked for his opinion by a fan.

"With saliva ban coming into play, do you think life will become more difficult for bowlers who don't possess express pace, especially in red-ball cricket? Can sweat really do the job in cooler countries like England or New Zealand?" the user asked him.

"Sweat is not possible everywhere in the world , definitely it's going to be challenging. Hope things get better soon as they were," Bhuvneshwar Kumar replied.