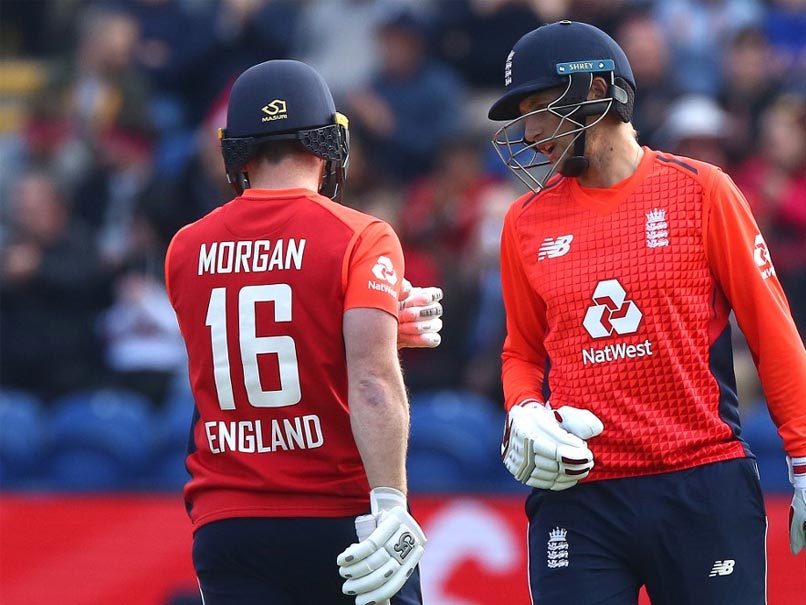 England overhauled Pakistan's total of 173 for six with four balls to spare.© AFP

England captain Eoin Morgan led his side to a seven-wicket win over Pakistan in a lone Twenty20 international in Cardiff on Sunday with an unbeaten innings of 57. Test skipper Joe Root made 47 and James Vince 36 as England overhauled Pakistan's total of 173 for six with four balls to spare at Sophia Gardens. This was England's second victory in three days after their one-day international success away to Morgan's native Ireland in Dublin on Friday as they continued an encouraging start to a season that sees them staging both the 50-over World Cup and the Ashes.

The recalled Ben Duckett fell early in England's chase, driving Shaheen Afridi to mid-off, but Vince and Root kept England up with the run-rate thanks to a series of sparkling shots.

Vince was caught down the legside by Pakistan captain and wicket-keeper Sarfraz Ahmed off Imad Wasim but Morgan kept the runs coming, taking 14 off three successive balls from medium-pacer Faheem Ashraf.

And even when Sarfraz caught Root, there was little danger to England's hopes of victory with Morgan hitting five fours and three sixes in his 29-ball stay.

There was a bizarre incident at the start of Pakistan's third over when the ground made way beneath David Willey as the England seamer was just about to make his delivery stride.

Babar Azam (65) and Haris Sohail (50) shared a stand of 103 after Pakistan had been 31 for two following Sarfraz's decision to bat first on a green-tinged pitch.

Pakistan then saw both their well-set batsmen fall in quick succession with Barbados-born Archer, renowned for his form in T20 franchise cricket, removing Haris before he ran out Babar.

England and Pakistan will now play a five-match ODI series starting at The Oval on Wednesday.

Joe Root Cricket
Get the latest updates on ICC T20 Worldcup 2022, check out the Schedule and Live Score. Like us on Facebook or follow us on Twitter for more sports updates. You can also download the NDTV Cricket app for Android or iOS.