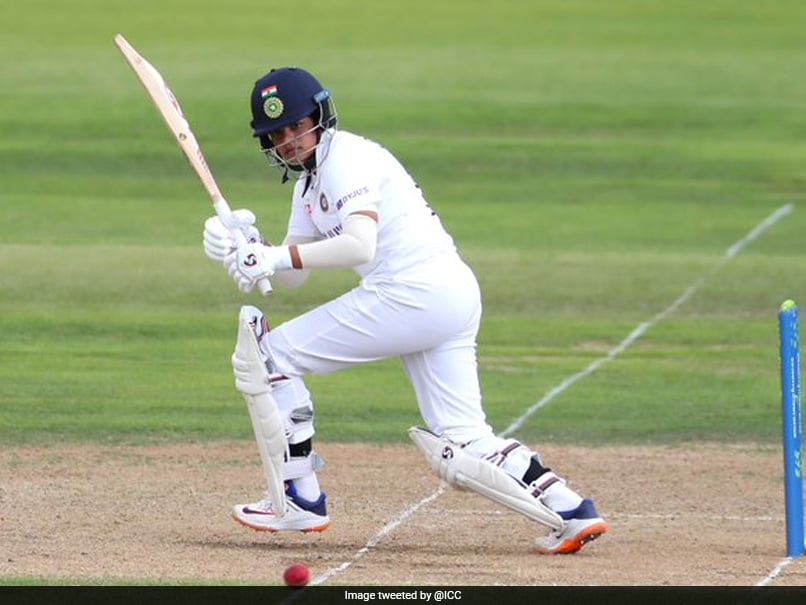 Shafali Verma scored her second half-century in her debut Test vs England.© Twitter

India's Shafali Verma on Friday became the youngest woman, and the fourth overall, to score twin half-centuries in her debut Test match. She reached the milestone against England at Bristol in the ongoing one-off Test. The record was previously held by Australia's Jessica Louise Jonassen, who was 22 when she scored fifties in both innings of her debut Test match. She too achieved the landmark against England. There are only two others apart from Shafali and Jonassen Sri Lanka's Vanessa Bowen and England's Lesley Cooke are the other two batters to have scored two half-centuries in their debut Test.

Earlier in the day, Indian team were bowled out for 231, giving the hosts a healthy lead of 165 runs.

India resumed the day from their overnight score of 187 for five but the lower-order failed to make a significant contribution as England bowlers stole the show in Bristol.

Sophie Ecclestone was the pick of the bowlers for England as she finished the innings with figures of four for 88. England skipper Heather Knight also chipped in with a couple of wickets as she removed Punam Raut and Shikha Pandey.

In the first innings, Shafali had played a scintillating knock of 96 in her first outing in the longest format of the game. Shafali's knock had given India a fine start as she had put on 167 runs with Smriti Mandhana for the opening wicket.

Shafali was unbeaten on 55 in an innings studded with 11 boundaries before the play was halted due to rain.

India were trailing England by 82 runs in the four-day fixture before rain forced the match officials to call of the rest of the day.