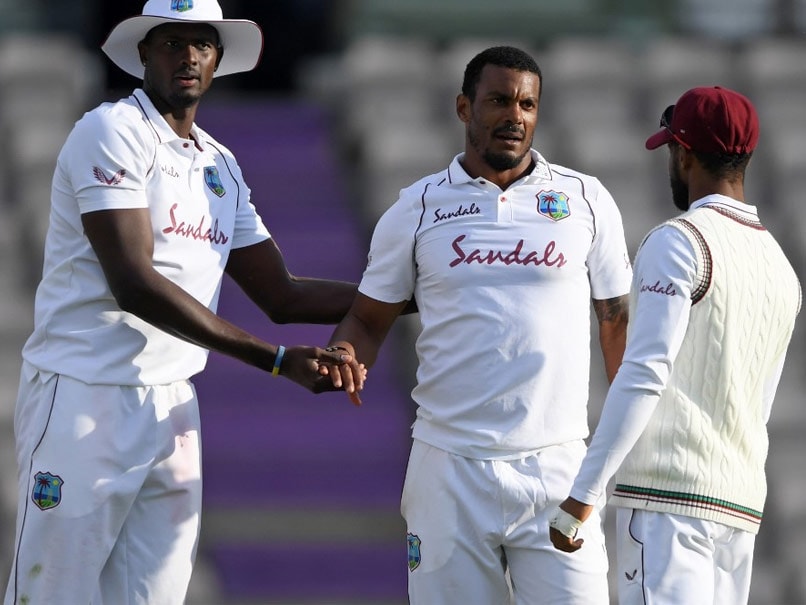 Shannon Gabriel played a starring role as the West Indies beat England by 4 wickets in the 1st Test.© AFP

West Indies captain Jason Holder praised the "massive, massive heart" of Shannon Gabriel following the tourists' four-wicket win in the first Test against England at Southampton on Sunday. Fast bowler Gabriel was named man-of-the-match after taking combined figures of nine wickets for 137 runs as international cricket returned from lockdown. The 32-year-old Trinidad quick was originally only named as a travelling reserve as he recovered from ankle surgery. But he proved his fitness in two intra-squad warm-up matches and then showed his class as West Indies went 1-0 up in this three-match series.

Gabriel now boasts a fine career record of 142 wickets in 46 Tests at an average of under 30, with Holder telling reporters after stumps: "What Shannon has done in this game is nothing surprising.

"Shannon is just one of those guys who keep doing it. He has a massive, massive heart and he's been through a lot.

"He wants success so badly. His body hasn't held up the way he would like but to see him back out there fit and well and bowling fast for the West Indies is always a pleasing sight.

"He deserves every bit of success he's had in this game. I'm really, really happy for Shannon, I know what he's been through.

"We kept in contact while he was doing rehab. At some stages he was very frustrated by how things were going but he stuck it through," added all-rounder Holder, who himself took a Test-best 6-42 in England's lowly first innings 204.

"We all know when Shannon is fit and healthy, he is a handful and he proved it in this game."

For all Gabriel's heroics, the West Indies still needed to bat well after being set a target of 200 to win on Sunday's final day.

They got there largely thanks to Jermaine Blackwood's 95.

Blackwood might not have played had fellow batsmen Darren Bravo and Shimron Hetmyer decided to tour rather than opting out of a campaign taking place against the backdrop of the coronavirus pandemic.

Holder said of Blackwood: "He had an outstanding first-class competition -- his case to get back in the team was pretty strong.

"He's not a slouch at this level either, he has done well for us and I hope he can kick on."

England stand-in skipper Ben Stokes said he had no regrets over either leaving out veteran paceman Stuart Broad or deciding to bat first in overcast, bowler-friendly, conditions on Wednesday.

Broad, England's second-most successful Test bowler of all time, revealed how "frustrated and angry" he felt at being left out of a home Test for the first time in eight years during a mid-match interview.

"We made a decision based around thinking pace was going to stand us a better place in the long game. Stuart is a fantastic bowler and he understands the reasons why," said Stokes.

"If I was to regret that, I don't think that sends the right message to the other guys I picked.

"Looking at the interview he gave I thought it was absolutely brilliant, to see the desire and passion that he showed."

Stokes said he was looking forward to handing the reins over to regular captain Joe Root for next week's second Test after the star batsman missed this match following the birth of his second child.

"He's one of the best players in the world, so he is a big miss when he doesn't play -- and obviously next week I don't need to make any of the decisions, so good luck Joe."

Jason Holder England vs West Indies, 1st Test Cricket
Get the latest updates on SA vs IND 2021-22, check out the Schedule and Live Score . Like us on Facebook or follow us on Twitter for more sports updates. You can also download the NDTV Cricket app for Android or iOS.