Jos Buttler took to Twitter to share a picture with Eoin Morgan and Harry Kane from The Hundred. 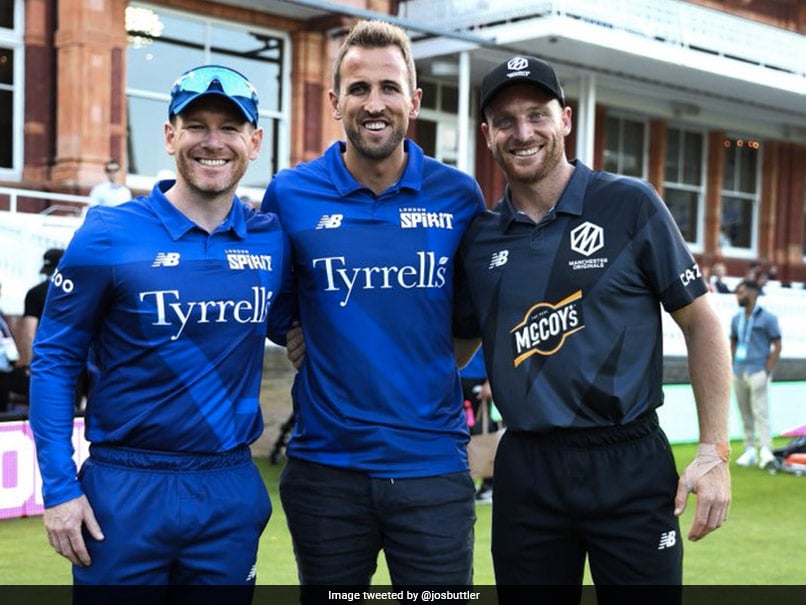 England's white-ball captain Jos Buttler and his predecessor Eoin Morgan are best known for their ability to strike huge sixes, but can they team up with Tottenham striker Harry Kane to form a dangerous strike partnership in front of goal? That's what Buttler reckoned in his latest Twitter post. The swashbuckling wicketkeeper-batter took to Twitter to share a picture with Morgan and Harry Kane from The Hundred. "Dangerous front 3.....One banker and a couple of value options for your @OfficialFPL teams this weekend!" he captioned the picture.

Dangerous front 3…..One banker and a couple of value options for your @OfficialFPL teams this weekend! pic.twitter.com/HBClOHQJFd

Kane, who is the captain of the England men's football team, is also the second-highest goalscorer in the country's history and needs only four goals to go past Wayne Rooney as England's leading scorer.

Kane has 50 goals for England, while Rooney had scored 53.

Kane's team Tottenham Hotspur had a good start to the Premier League 2022-23 campaign, coming back from behind to register a 4-1 win over Southampton.

Tottenham will take on London rivals Chelsea this weekend.

Buttler, meanwhile, was named the England white-ball captain earlier this year after Eoin Morgan announced his retirement from international cricket.

Morgan is playing for London Spirit in The Hundred, while Buttler is representing Manchester Originals.

Kane, a known cricket enthusiast, has been a part of The Hundred as well, taking part in six-hitting competitions before matches and also appearing in the commentary box.

Eoin Morgan Harry Kane Cricket
Get the latest updates on IPL Auction 2023 and check out  IPL 2023 and Live Cricket Score. Like us on Facebook or follow us on Twitter for more sports updates. You can also download the NDTV Cricket app for Android or iOS.