Cameron Bancroft was included in the Perth Scorchers squad after his nine-month ban came to end on Saturday. 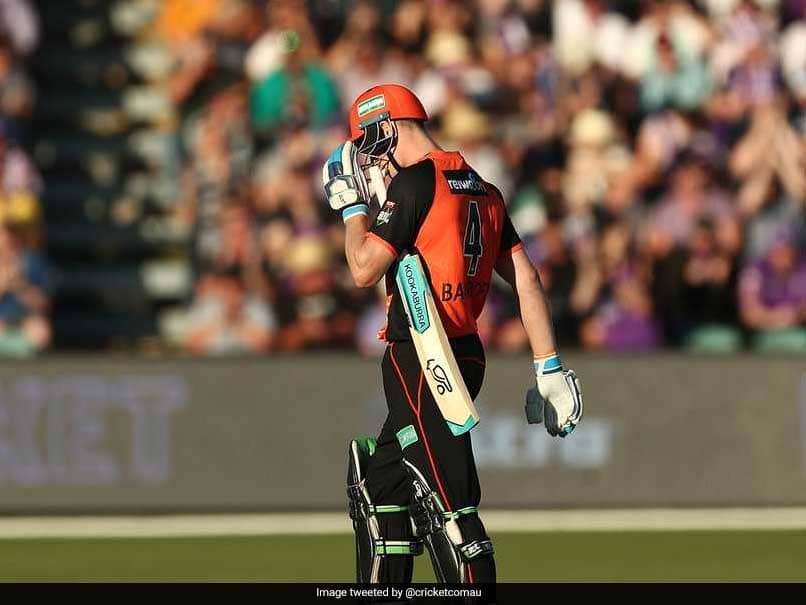 Cameron Bancroft's return to cricket after serving a nine-month ban lasted just three balls as the 26-year-old was dismissed for 2 in the Big Bash League (BBL) match against Hobart Hurricanes on Sunday. Bancroft, who came into bat at number four was dismissed by Riley Meredith in the fourth over of the Perth Scorchers' innings. Bancroft, whose ban ended on Saturday, was straightaway included by the Scorchers in the squad but "looked nervous" as he came into bat with his side reeling at 16 for three after being asked to bat.

Bancroft played the first ball off his pads to square leg for two. The right-hander then blocked another one before getting an edge off Meredith to Matthew Wade behind the stumps.

Despite his quick exit, he was applauded by the crowd at Launceston in Tasmania as he trudged off.

Former Australian captain Ricky Ponting, who was commentating on the game, said he spoke to Bancroft beforehand and he was "really, really nervous".

"He was a little bit worried about the pace these boys might be bowling at him as he's only played club cricket for the past few months," he said.

"He said to me that even going out on this wicket he's sure everything was going feel like it's a Test match at the WACA," said Ponting, referring to the notoriously quick Perth ground.

Along with Bancroft, then-Australian captain Steve Smith and his deputy David Warner were banned for a year over their part in the tampering scandal.

Their suspensions run out in late March.

Bancroft re-emerged into public life with an explosive television interview last week in which he confirmed Warner asked him to rough up the ball.

He claimed he went along with it "to fit in" and because he "didn't know any better".

Bancroft also said he almost gave up cricket to become a yoga teacher in the darkest days of his exile.

Hobart Hurricanes Cricket
Get the latest updates on India vs Australia Series, check out the India vs Australia Schedule for 2020-21 and Ind vs Aus live score . Like us on Facebook or follow us on Twitter for more sports updates. You can also download the NDTV Cricket app for Android or iOS.