Ben Cutting received five stitches but was later cleared to take on the field. 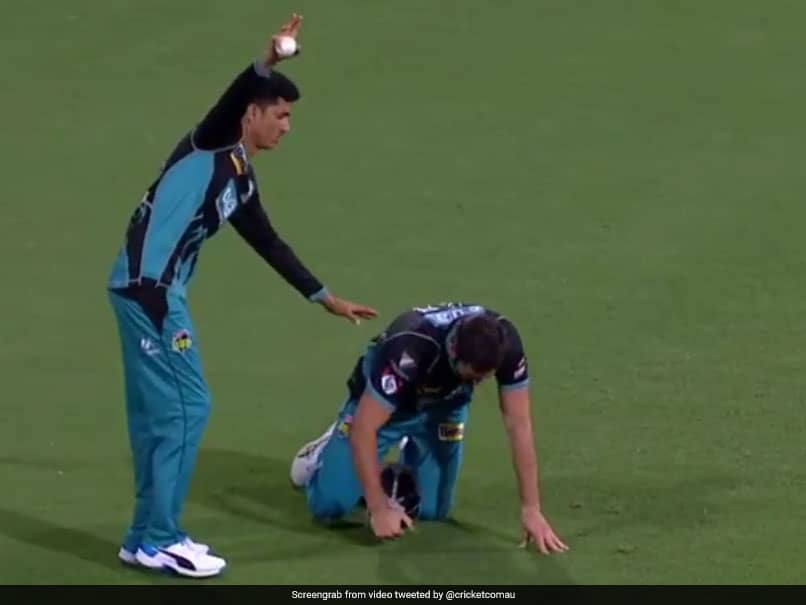 Ben Cutting was left with a bloodied face after the failed attempt.© Twitter

All-rounder Ben Cutting suffered a nasty blow to his face while fielding during a match against Melbourne Renegades in the ongoing Big Bash League (BBL) on Thursday. Cutting, who represents Brisbane Heat in the league, got hit by the ball while attempting a catch during Renegades run-chase. Going for a catch with a reverse cup, ball went straight through Cutting's hands, hitting him on the face. Soon after being hit, medical staff rushed in to attend to the 31-year-old, who was left with a bloodied face. Cutting left the field immediately and received five stitches. But the all-rounder was later cleared to take on the field after passing the concussion test.

Meanwhile in the #BBL...

Ben Cutting tries to catch a ball with his face. (and fails) pic.twitter.com/M6BmQ8yPsT

The incident took place in the first over of Renegades' run-chase after opener Marcus Harris miscued a shot against pacer James Pattinson. Cutting, who was fielding at mid-on, ran towards his left to mid-wicket region in an attempt to catch the ball. Although Cutting got into a decent position to catch the ball but eventually failed to hold onto it.

On the match front, Renegades registered a comfortable eight-wicket win against the Brisbane Heat. Chasing a moderate target of 145, Renegades reached the target, losing just two wickets and with 26 balls to spare.

Sam Harper (56 not out) and Tom Cooper (36 not out) strung together a crucial 50-run partnership for the fourth wicket, taking Renegades to a comfortable win.

Harper was the top-scorer for Renegades and was adjudged man for the match.

Earlier, Brisbane Heat were restricted to 144 for eight after being invited to bat first by Renegades. Brendon McCullum (50) was the top-scorer for Brisbane while Cutting scored 20 off 10 balls before getting out to Joe Mennie.

James Pattinson Marcus Harris Cricket
Get the latest updates on India vs Australia Series, check out the India vs Australia Schedule for 2020-21 and Ind vs Aus live score . Like us on Facebook or follow us on Twitter for more sports updates. You can also download the NDTV Cricket app for Android or iOS.