India are slated to a play four-match Test series against Australia this year, beginning from December 4 in Brisbane wherein the second match of the series would be a day-night contest. 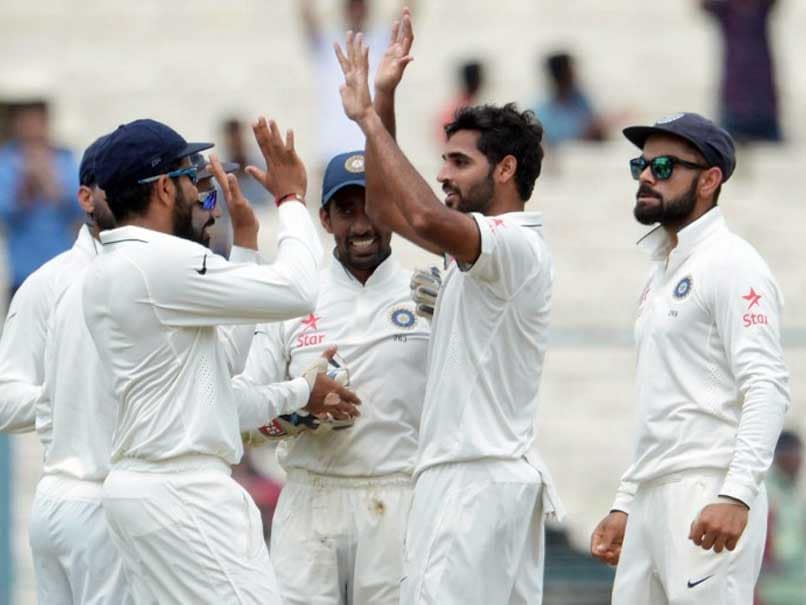 Bhuvneshwar Kumar said it will be fun playing a pink ball test against Australia in Adelaide.© AFP

Playing a day-night Test against Australia could be "challenging", believes Indian pacer Bhuvneshwar Kumar, as the Tim Paine-led side has played more matches with the pink ball in their backyard. The two sides are slated to take on each other in a four-match Test series this year, beginning from December 4 in Brisbane wherein the second match of the series would be a day-night contest.

In an interaction with ANI, the 30-year-old bowler opened up about the prospect of facing Australia in a pink-ball Test, the quality of Indian pace attack, and how the life has changed due to the coronavirus-induced lockdown.

"Everyone is excited for the series between India and Australiaas after a long time, there would be a game to watch and also, we would be playing against one of the toughest opponents out there," Bhuvneshwar said.

The ongoing pandemic has forced governments around the world to put everything on halt and focus on the well-being of its citizens. In the light of which it is quite likely that the Indian team may also be asked to go under quarantine after landing in Australia as a precautionary measure.

However, the Indian pacer believes that it might be a blessing disguise as it would help the national squad to get acclimatised to the Australian conditions.

"Yes, it [quarantine] will help for sure in preparing better for those conditions," he said.

Over the past two-three years, the pacers have taken a bulk of wickets and are often the ones on whom skipper relies for a breakthrough at crucial junctures.

When asked whether the Indian bowling attack is the best in the world, as is regarded by many, the 30-year-old said, "I do not know whether it is the best or not but it is very good for sure because of every individual's ability. You need the support of the captain through everything and Virat has always been helpful to each of us."

Known for his ability to swing the ball both ways, the bowler has played a major role in winning the matches for the SunRisers Hyderabadin the Indian Premier League (IPL).

He also led the side in a few matches in the 2019 edition, and would have been seen in action had the T20 tournament commenced on March 2019. It had to be postponed indefinitely due to the coronavirus pandemic.

However, speculations are rife that the tournament might go ahead if the T20 World Cup, slated for October-November, gets postponed. With the rise in COVID-19 cases, India currently is the third-worst affected country by coronavirus in the world.

Hopeful about the IPL prospects this year, Bhuvi said, "I hope IPL happens this year, we will play anywhere in the world."

India last played an international series against New Zealand earlier this year, however, Bhuvneshwar was not a part of the squad owing to an injury. Due to the COVID-19 restrictions, the Indian pacer is currently working out at home, he said.

"I do not know when cricket will resume but everyone will be excited to come back to the ground," he added.

He has so far played 21 Tests, 114 ODIs, and 43 T20Is for India, managing to take 236 wickets across all formats. He has also managed to win the Purple Cap (award presented to the leading wicket-taker in the IPL).

The pacer had become an overnight sensation when, at a young age of 19, he had bowled Sachin Tendulkar out for a duck in domestic cricket. From his debut in 2012 to now, the 30-year-old has cemented his place as one of the best bowlers in the world.

Bhuvneshwar Kumar Cricket
Get the latest updates on Fifa Worldcup 2022 and check out  Fifa World Cup Schedule, Stats and Live Cricket Score. Like us on Facebook or follow us on Twitter for more sports updates. You can also download the NDTV Cricket app for Android or iOS.