"My Pride Is Intact": Courtney Walsh After Bangladesh's Clean Sweep Against Windies

Courtney Walsh, who acts as fast-bowling coach for Bangladesh, said the thumping was bittersweet. 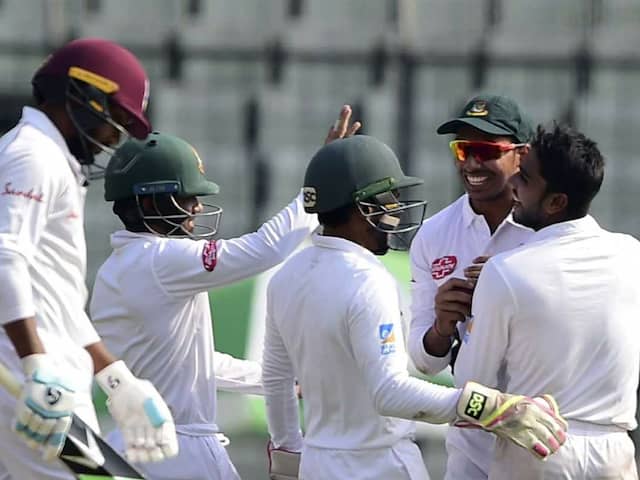 Windies become the first side Bangladesh has ever asked to follow-on.© AFP

Courtney Walsh, former Windies bowling legend and current Bangladesh coach, expressed mixed emotions following the thumping of his native team by his disciples in the recently concluded two-match Test series. Bangladesh registered their first-ever innings win on Sunday to complete a 2-0 clean sweep against the Windies in Dhaka. The visitors were bundled out for 111 and 213 runs in successive innings of the second Test, during which Bangladesh had asked a team for the first time to follow-on.

Walsh, a Jamaican cricketing giant who took 519 Test wickets for the West Indies, today acts as fast-bowling coach for Bangladesh, and said the thumping was bittersweet.

"I might say that I am disappointed with probably how things have unfolded, but I am very happy to be involved with Bangladesh," Walsh told reporters in Dhaka.

"We are in a winning situation, so my pride is intact. As a West Indian, you are going to be disappointed in the performance."

Walsh's part in the second Test win was somewhat diminished as Bangladesh did not field a single fast bowler, an unprecedented move for the home side.

Their lone fast bowler in the first Test, Mustafizur Rahman, bowled just four overs in that match, leaving the spinners to dominate.

Shakib Al Hasan, Mehidy Hasan, Taijul Islam and Nayeem Hasan accounted for all 40 wickets, a record for a Test series in Bangladesh.

Despite the spinners' dominance, Walsh insisted Bangladesh's fast bowlers had more to give.

"Tactically, we wanted to play more spinners to win a Test and the series. It was achieved," he said.

"Hopefully when we go to New Zealand, the seamers might get a better opportunity. We might get different types of wicket, and they should want to grab those opportunities as well."

Bangladesh Cricket Team Courtney Walsh Cricket
Get the latest Cricket news, check out the India cricket schedule, Cricket live score . Like us on Facebook or follow us on Twitter for more sports updates. You can also download the NDTV Cricket app for Android or iOS.