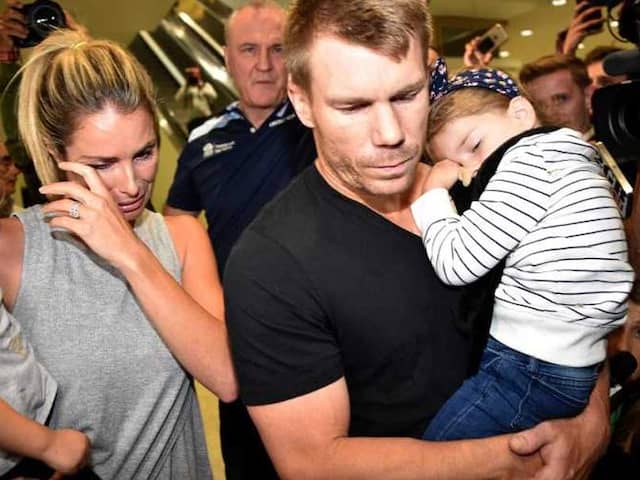 Disgraced Australian cricketer, David Warner's wife Candice has revealed that she suffered a heartbreaking miscarriage in the aftermath of her husband's involvement in the infamous ball-tampering saga that unfolded in South Africa. The four-match series was already fractious before the drama that took place on Day 3 of Cape Town Test, with a row erupting between Warner and Quinton de Kock during the first Test which the Australian said was sparked off when the South African insulted his wife. Candice said that she blamed herself for her husband's part in the scandal, adding that the taunts they faced in South Africa took a huge toll. "I hoped the terrible stuff was behind us. We love Cape Town and it's where Dave proposed to me in 2014. I was beginning to feel that first stage of being pregnant - the subtle changes to my body were kicking in. We were overwhelmed, knowing another little Warner was on the way," Candice told Women's Weekly.

"I don't think either of us realised how much we longed for this baby. We had been trying since last July and I did a test when we first got to Cape Town," she added.

The couple are the parents to daughters Ivy Mae, three, and Indi Rae, two, with the 33-year-old revealing that they were overjoyed by the thought of welcoming a third child.

When the news broke out that three tainted cricketers were being sent home, Candice feared that her unborn child would be affected by the added stress and strain of travelling home on a 23-hour flight.

"I called Dave to the bathroom and told him I was bleeding. We knew I was miscarrying. We held one another and cried... The miscarriage was a heartbreaking end to a horror tour. The ordeal from the public humiliations to the ball tapering had taken its toll," she revealed.

Warner and Steve Smith were handed 12-month suspensions by Cricket Australia for altering the condition of the ball during their recent tour of South Africa.

The former Australian skipper and his deputy had to let go of their contracts with Rajasthan Royals and SunRisers Hyderabad respectively for the ongoing Indian Premier League (IPL) following the outrage over the ball-tampering scandal.